In Review: Yoko Tsuno - The Morning Of The World 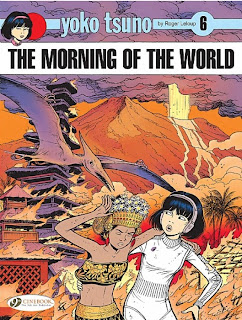 Yoko Tsuno returns to Bali with her adopted daughter Morning Dew and her friends Vic and Pol and there they meet up with Yoko's cousin Monya who has developed a time machine that Yoko has travelled in before. However Monya has travelled in time to 1350 and caused Narki, a native dancer, to be sentenced to death and she wants Yoko to return to the past with her to help save the girl. In 1350 Monya and Yoko are captured by the girl's tribe and, in an attempt to save the girl's life, are forced to fight off the pteranodons that dwell near the Agung volcano that the tribe calls "The Morning Of The World". 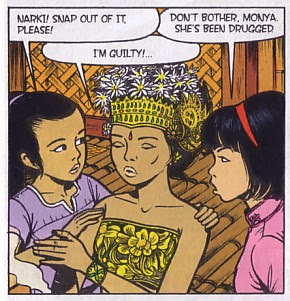 Originally published in Spirou issues 2613 to 2630 between May and September 1988 as Le Matin Du Mond, The Morning Of The World is effectively a sequel to the earlier Yoko Tsuno time travel story The Time Spiral which Cinebook have already translated. While it would be beneficial to have read the previous title to understand all the references to it, this book can be read by itself without unduly harming the enjoyment of the book. The story itself rattles along jumping from one problem to another throwing in time travel, active volcanoes, flying dinosaurs and the imminent threat of death on several occasions for both our heroine and her friends. As long as you don't think too deeply about what is going on then this is a fast moving and exciting adventure which, like all Yoko Tsuno stories, is aimed at a younger audience and so feels simplistic to a adult reader. 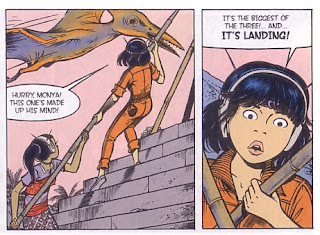 This means that, for instance, there is no explanation of why Yoko flies to Bali in a private fighter jet, and straps her young daughter into the plane's rear ejection seat, when they could just as easily have travelled to the island in the same airliner as the two male characters. But that is not the point since, with Yoko, Leloup is showing his young readers that women can be just as resourceful as men in roles and jobs that may still have be seen as male preserves when the story was originally published.

Like all Yoko Tsuno books, The Morning Of The World is an exciting if somewhat junior tale and if you have a younger daughter or niece, who in earlier years you would have considered buying Bunty comics or annuals for, then this is a book that would be well worth trying out on them, especially if they also like Doctor Who.


• There are more details of The Morning Of The World and all the other English language Yoko Tsuno books on the Cinebook website.

• There are more details of the original French books on the official Yoko Tsuno website (in French).
Posted by Jeremy Briggs at 7:00 am