In Review: Eagles Over The Western Front Volume 1 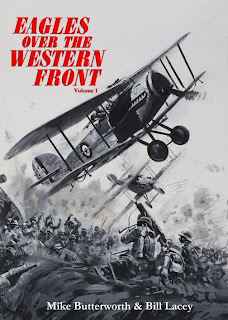 Forty years ago the weekly magazine Look and Learn was a parental purchase in many British households as parents saw its articles as educational while its younger readers saw its comic strips, including the now legendary Trigan Empire, as exciting. Many of those strips maintained the publication's educational remit by being adaptations of classic novels but 1971 saw the start of a aviation themed, Great War based strip entitled Eagles Over The Western Front written by Trigan Empire's Michael Butterworth and artist Bill Lacey.

Schoolboy Harry Hawkes was too young to volunteer for the military at the outbreak of World War One but is called up for the Royal Flying Corps by Easter 1915. Having learnt to fly the flimsy biplanes of the time, he is initially posted to France with his friend Entwistle to fly unarmed reconnaissance sorties over the front lines. There he encounters the world's first true fighter plane, the German Fokker E1, which is taking its toll on British pilots. By winter 1915 he is flying DH2 fighters as the British begin to take the fight back to the Germans. 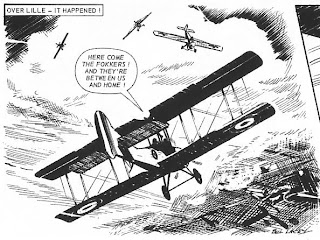 The 80 page book begins with the nine single weekly pages from July and August 1971 before moving on to its regular two pages pages per week. Unlike other strips of the time the stories do not follow a discernible pattern of (say) 10 pages per story and so there are both long stories and short stories in the mix. This means that Eagles never gets into a rhythm with the reader knowing that a story is about to finish because of the number of pages that he has read and some of the stories end very abruptly, as they would have in reality, with the death of a main character.

While you would expect a comic strip about a fighter pilot to involve our hero jumping in his plane and flying off to shoot down many of the enemy before returning safely home, in Eagles, especially in the early stories, the reason for our hero not to make it back to base is more often because of mechanical failure of the aircraft he is flying rather than any enemy action against him. As for shooting down the enemy, it is a plot point in at least two of the stories in Volume 1 that Harry has not actually shot down a single German plane despite be considered a good pilot. It all makes for an ongoing story that is interesting in its non-conformity to the expected rules of an aviation comic strip and it certainly makes the reader think about the frailty of the planes that RFC pilots were flying back then without the safety of parachutes. 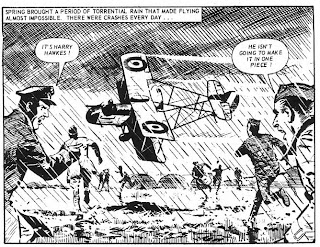 The book begins with a six page feature article setting the scene of both the beginnings of the Royal Flying Corps and the Great War itself. In the interests of transparency Bear Alley Books publisher Steve Holland asked me, as the resident aviation enthusiast, to proof read an earlier version of this article for accuracy and it was indeed accurate giving more than enough background for readers to appreciate the subtleties of what the characters were experiencing in those early years of the war before the conflict settled into the more familiar format of trench warfare. Indeed my main comment then was that the article focused on the historical side of the comic strip rather than on its creators but with Volumes 2 and 3 to come in June and July 2011, Steve assured me that both Butterworth and Lacey would each receive feature articles in them. Rather than reusing frames from the story, Steve uses WWI aviation illustrations from Look and Learn painted by Wilf Hardy to liberally illustrate the feature while the book's cover is a dynamic WWI scene featuring Brisfit fighters painted by Graham Coton since Bill Lacy was never given the chance to illustrate Eagles for the cover of the weekly magazine.

Eagles Over The Western Front Volume 1 makes for an interesting and sometimes thoughtful read without missing out on the excitement or entertainment that one would expect of a good comic strip of its era. With more than half of all the pages in this book and its two sequels being scanned from the original art boards, the artwork quality is as good as it can possibly get and shows that Bear Alley Books can give well established companies, that are also reprinting similar B&W British comic strips from the era, a run for their money.

There are more details of Eagles Over The Western Front Volume 1 on the Bear Alley Books blog including how to purchase it.

You can read part of Eagles Over The Western Front on the Bear Alley blog.
Posted by Jeremy Briggs at 7:00 am