In Review: Betelgeuse - The Survivors, The Caves and The Other

The Worlds of Aldebaran series, written illustrated and coloured by Leo (Luiz Eduardo de Oliveira), continues on from the original Aldebaran arc with the five album sequence of Betelgeuse published over four books by Cinebook.

With the narrator character of the previous Aldebaran books, Mark Sorenson, sidelined on Earth, the Betelgeuse books use his lover Kim Keller as its main character. Set some six years after the final book of the Aldebaran sequence, Kim is now a trained biologist in her own right and a daughter figure to the much older and childless Alexa Romanova. As a leading figure in the Mantris group, Alexa is able to use her influence to get Kim on the expedition that sets off to investigate the disappearance of a recent colony ship from Earth to the planet Betelgeuse 6. There the expedition discovers the abandoned colony ship in orbit with most of its colonists dead and the surviving crew, who are living on the surface of the planet, split into two opposing groups. The larger group, dominated by the military, has set up their small colony in a lush river canyon while the smaller group dominated by the scientists is living on the desert-like canyon rim. From there they study the Iums which appear to be the most intelligent of the planet's indigenous creatures. 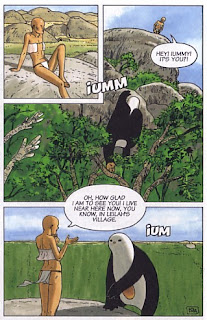 Named by the colonists for the noise they make, the Iums are a cross between a panda and a gorilla with no mouth and a biological "battery" in place of a stomach. Without a mouth they have no speech and therefore the two groups of colonists are divided as to whether they represent a sentient species or are just an intelligent animal. This division takes on a greater importance as under Earth law planets already inhabited by sentient species cannot be colonised however a vast amount of money has already been invested in the Betelgeuse colony for it to fail due to the disputed possibility of sentience in the Iums.

Realising that her word may be the deciding factor in the decision as to colonise the planet or not once they are all rescued, Kim leads an expedition made up of people from both colonist groups into the depths of the canyon to try and determine once and for all just how intelligent the Iums are. As the expedition ventures further through the canyon than has previously been explored, the humans face more and more bizarre and dangerous creatures before Kim begins to realise that there may be a link between the two planets of Aldebaran 4 and Betelgeuse 6.

Leo builds on the universe and characters he created for the Aldebaran arc and continues their stories on a new planet with seemingly new problems. However the basic setup of the factions is remarkably similar to the previous books with a male totalitarian military regime dominating women on the one side and a rebel grouping opposing them on the other. Where the Aldebaran plot jumped somewhat between the second and third albums, the Betelgeuse plot is smoother over the five albums and while it doesn't take the years of the previous books it does take place over months although it does have some rather convenient coincidences as the characters discover more about the planet and its inhabitants. Unlike on the fairly lo-tech Aldebaran, the human colonists of Betelgeuse have more hi-tech gadgets to help them and, while the spaceships are well designed, the aerojeep does rather look like it was built by Volkswagen while the aerobike is basically a large Sinclair C5. 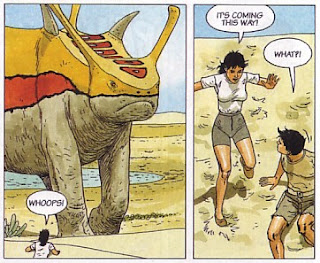 However, as in the Aldebaran books, it is with the flora and fauna of Betelgeuse 6 that Leo's imagination and artwork shine. His concepts and designs of his alien creatures and their surroundings are unique and fascinating. While the Iums are either friendly or hostile depending on which group of colonists they are dealing with, the majority of the rest of the creatures that the books feature tend to be hostile for one reason or another.

The plot leaves the reader wondering just how intelligent the Iums really are until far into the books when Leo takes a big and unexpected side step to explain just what is happening on the planet before he returns to the main story. This twist will, no doubt, be returned to in future books but it felt contrived when it happened and is one of a series of issues with the books that include the repetition of the motivations of the human factions, the coincidences that keep the plot ticking over, and the most blatant censorship of any of Cinebook's titles as they strive to retain the female characters' modesty in the hot and sticky environs of the canyon.

Yet despite these issues, I read the five Betelgeuse albums back to back not because I had to but because I wanted to. Leo's imagination gripped me and I wanted to know just what made this world and its creatures tick and that overrode any other issues I had with these books and left me looking forward to the beginning of the next part of the story in the Antares sequence of titles.


The Worlds Of Aldebaran books were originally published by Cinebook as two French albums per English book before being standardised to the current one album per book, with the first Betelgeuse album being published in the third Aldebaran book before the Cinebook series changed titles.

The following is a listing of which French albums appear in which English books.

• Buy the Worlds of Alderbaran books on amazon.co.uk

• There are more details of all the original albums (in French) on the official Worlds of Aldebaran website.
Posted by Jeremy Briggs at 7:00 am