In Review: The Boys - Highland Laddie 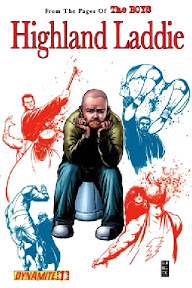 The Book: Mind reeling from recent events in The Boys (told in the 'Believe' arc), Wee Hughie heads home to Auchterladle - the semi-idyllic Scottish seaside town where he grew up. All Hughie wants is some time to himself, to return to the bosom of family and friends, and get his head together after two years of unimaginable chaos - wondering whether he should leave The Boys or not. But our hero's luck has always been more cloud than silver lining, and the familiar surroundings he craves are not all they might be.

You can go home again, but with old pals warped beyond recognition and strangers in town up to no good, whether or not you should is another matter entirely...

The Review: Collected by Dynamite in the US, now publishers of The Boys comic, Titan Books are distributing the UK edition of  the creator owned series, written by Garth and normally drawn by Darick Robertson, which was originally published by Wildstorm before moving to Dynamite Entertainment, apparently after DC Comics expressed unease at the anti-superhero tone of the work.

The series is set in a contemporary world very much similar to the real one, with one notable exception: a number of people have some form of superpower. The series follows a superpowered CIA squad, known informally as "The Boys", whose job it is to keep watch on superheroes and, if necessary, intimidate or kill them.

It's 2000AD artist John McCrea who provides the art on this 'quieter' story, as Hughie takes stock of his life by going home, only to have the kind of violence that has punctuated his daily life follows him here. Garth mixes in some great quirky 'normal' characters into the story (normal being a giant transvestite called Big Bobby and Det, a man who smells so badly he and his family have to wear gas masks); and Hughie is forced to come to terms with his relationship with his super powered ex-lover, whose guilty secrets have been revealed, forcing a wedge between them.

While the story has an adventure/mystery bubbling away in the background (smugglers dealing drugs laced with Compound V, or "Blue", which can grant some superpowers, permanently if taken pure), it's Hughie's story that's the focus of the tale. In that sense, it's an unusual Ennis tale (of those I've read), perhaps far more character than action driven than what you'd expect. Garth delivers a great story, with some genuinely moving moments and carefully building on what readers already know about Hughie and Annie. 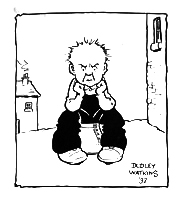 Garth's angst-filled script is complemented by some great art from John McCrea, particularly in key 'flashback scenes' (the one involving Hughie's strange aunt is positively creepy) and the 'talkie' scenes, notoriously hard to make interesting in comics. John delivers with aplomb, in my view.

No ordinary 'Boys' tale, then, but still hallmark Ennis, delivered with just the right mix of trademark violence and a fine dose of spirited characterisation. Not normally a title I'd have picked up, but I thoroughly enjoyed it.