War Comics On Tour In Scotland 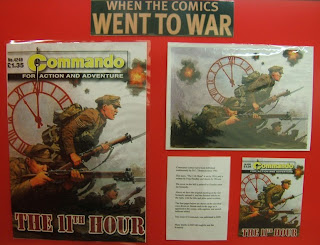 On a day of protests to keep UK libraries open we are pleased to bring you a positive library story. In early December 2010 Carnoustie Library opened an exhibition of war comics that was due to run of the entire month and which we covered here. Due to the unprecedented snow that blanketed the country in December the exhibition was extended into January 2011 to allow visitors to see it.

As well as Commando images taken from the World War 1 story The 11th Hour, written by Ferg Handley, and with artwork of by both Ian Kennedy (right) and Olivera, the exhibition covered Pat Mills and Joe Colquhoun’s Charley’s War and Jacques Tardi’s It Was The War Of The Trenches. Other war titles in the exhibition included DC’s Enemy Ace and anthologies showing work by Reed Crandall, John Severin, Art Spiegelman and Alex Toth. The exhibition also looked at how British comics dealt with war through the years with Adam Riches’ book When The Comics Went To War.

Exhibition organiser David Robertson, who is Senior Library Assistant at Carnoustie, has been back in touch with downthetubes to tell us that Commando artist Ian Kennedy visited the library to see the exhibition for himself while it was on. He goes on to tell us that the response to the exhibition has been so positive that it is now going on tour around five of the other Angus region libraries.

Dates for the exhibition at each of the libraries will be available closer to the time while the opening hours for each of the five libraries are available on the Angus Council website.
Posted by Jeremy Briggs at 8:00 pm