Flesh returns to 2000AD in March 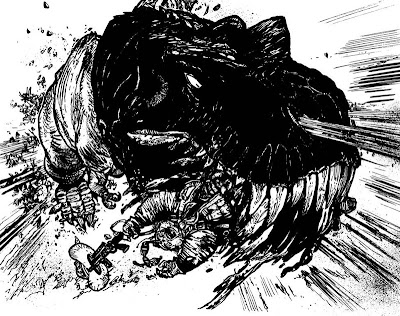 After more than 30 years, one of very first strips to appear in 2000AD is to return in blood-splattering, eon-spanning dinosaur-hunting glory.

Dino-terror classic Flesh is to return to the weekly comic with Prog 1724, out on 9th March.
Written by the series‟ original creator, Pat Mills, and drawn by James McKay, the new series is the long-awaited sequel to the much-loved original Flesh – part of the line-up in the very first issue of 2000AD in 1977.

Penned by Mills and drawn by Spanish artist Boix and Ramon Sola, Flesh was a futuristic Western where time-travelling ranchers farmed dinosaurs like cattle and sent their meat back to a hungry future.

The dinosaurs fought back and destroyed the Trans-Time base – and the new series follows the survivors as, stranded millions of years in the past, are ordered to drive their herds across the prehistoric American landscape to Texas – where another base promises safety ... and profit!

The new series will premiere with a stunning gatefold cover by Death’s Head II and Testament artist Liam Sharp.

“Flesh was one of the original strips from the very first issue of 2000AD in 1977 and while there have been spin off stories, we never found out what happened to the survivors of Trans-Time Base Three," notes 2000AD editor Matt Smith.

“It's great to see the sequel make it into 2000AD, 30 years after it first appeared," he adds. "It's a great strip with some fantastically gory dinosaur action that will appeal to both old fans who read the original and new readers who want comics with some real bite!”

"James has done the impossible," says Pat. "He's brought Flesh back to life with a vengeance. After Ramon Sola's brilliant interpretation of Flesh in Book One, I never thought I'd find another artist who could do justice to its varied themes - cowboys, time travel, science fiction and dinosaurs. James has achieved this and more."

• 2000AD 1724 will be on sale from 9th March 2011, priced at £2.25, available to buy online, from all major magazine retailers across the UK and Europe and from all good comic stores across the US.

• More info at: www.2000ADonline.co.uk. For details on the original Flesh visit: www.2000adonline.com/vault/series/flesh/story/flesh_book_1