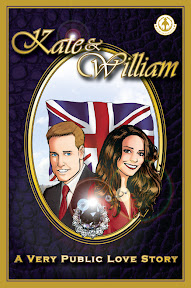 British graphic novel publisher Markosia Enterprises is proud to present to the nation a dramatic retelling of the lives of Prince William and Kate Middleton in their new graphic novel Kate & William - A Very Public Love Story.

Written by Rich Johnston, it tells the life story of the happy couple in two directions.

Mike Collins, perhaps best known for his Doctor Who and Star Trek work, tells Kate's story in the manner of a 1970's girls comic book, with some very modern touches. Each event is given added depth and resonance by the use of a fictional diary.

Meanwhile, Scottish artist Gary Erskine delivers a more bombastic story, following William from the rugby pitches of Eton to army officer training at Sandhurst before his army and RAF exploits, all the time narrated by newspaper headlines and mission briefings in a style more familiar to the army and sports comics for boys.

Markosia Enterprises say they've set out to tell the story of Prince William and Kate Middleton's romance in a very different way, offering a dramatic biography with two separate stories told from either end of the comic, coming together in the middle with a fictional look at the wedding day itself, with a kiss. How could it end any other way?

Rich Johnston, a major contributor to the comic news site Bleeding Cool, is a well-known comics industry figure, with appearances on The One Show, Channel 5 Movie Shows, and Radio 4's The Today Programme. His previous work, The Flying Friar and Watchmensch received rave reviews, as did his stint on IDW's US Doctor Who comics.

"I suggested the idea to the publisher on Instant Messaging," says Rich Johnston, who tells us the biggest challenge for him in doing this book was "taking out books about the royal couple from the library while still appearing to be male."

"Gary Erskine suggested me to Harry as a good 'girl' artist," says Mike Collins, who has been illustrating comics and working as a graphic designer for over 25 years and whose adaptation of Charles Dickens A Christmas Carol selected as one of the top ten graphic novels back in 2008 by The Sunday Times. "Rather than take that as some kind of Alpha Male challenge, I ran with it, embracing my inner Jackie!

"The biggest challenge on this job for me was realising that these are real people, not actors playing roles."

"Harry Markos called me last year and said that he had a special project in the offering and asked me if I was interested," says Gary Erskine, who has been illustrating comic books for 18 years of his role. "Rich had recommended me as a perfect choice for a 'real book about real people' and felt it played to my strengths (or lack of superhero strength?) It also needed to be grounded visually and my realistic work had helped secure the job! It certainly was an offer I couldn't refuse."

"Thankfully I was given the opportunity to work on the William book (leaving the lovely Kate Middleton in Mike Collins more sympathetic artistic hands) My approach was more of a Boys' Own adventure book to compliment Mike's Mandy girl comic style for Kate."

"The biggest challenge for me on this was trying to remain respectful to the subject matter but still producing a good looking book," he adds.

In addition to his comics work, Gary has contributed character designs and storyboards for television, commercials and games development, working with various companies including DC, Marvel Comics, Dark Horse, Virgin Comics and Titan Books and, like Mike, is used to working with licensed properties and ensuring he's delivered an accurate likeness, but feels that when you're dealing with real people as opposed to licensed characters or even actors there is also a responsibility to portray them well.

"Having dealt with licensed properties (and actor and agent approvals) it is always better to flatter the principals," he feels. "Both Mike and I will be honest to a degree, but never cruel.

"Besides, the two books are basically romances and that will be our primary focus for the art.

"This book is a celebration of Kate and William's lives leading up to their engagement and we have tried to remember that. We'll leave the salacious gossip and snooping to the red tops and celebrity rags.

"I'm not really a Royalist but I respect what they do to promote the country abroad and welcome their charitable work. William's continuation of his mother's landmine work is particularly admirable."


How do the creators think it will be received? "With cynicism, suspicion and mockery," feels Rich, until they start reading it."

"I think we've got real cross-over potential with this," feels Mike, "getting comics into the hands of an audience that has neglected the medium, maybe has never read a comic. Whether we're just the four-colour equivalent of a decorative plate, we'll see."

"There will no doubt be cynical naysayers and public sniping for our books from certain comic buyers and parts of the general public," Gary feels, "but to be honest... there's enough of that crap around anyways. We're producing a celebratory edition and would hope that most readers will see past their own personal cynicism and enjoy the book for what it is. There's darker books out there if that's their choice.

"We would only hope that we got it right and it is found to be popular and welcomed everywhere.

"I think Rich has done a great job with the script," he adds, "balancing the very public perception of William and allowing for a little creative license. It's always a delicate matter when dealing with real people and the obvious sensitivities that come with their history. He has written a very good script for all that and I am delighted to be working with him on the story."

But what does the man who greenlit the project feel about it - publisher Harry Markos?

"How do I feel? Well, I am about as excited about a book as I have ever been as a publisher,' he told us, "recognising the possibilities and success that it could have. The response we have had from all over the world has been overwhelming, it hasn't stopped!


"Put simply, if we are able to negotiate viable terms this could be one of the best selling graphic novels in the UK in years," he continues, "so you can imagine I am somewhat nervous as well as excited!"
Asked if they would be doing more royal projects in future if  the graphic novel is a success, Mike is cautious but hopeful.

"When Rich and Harry came up with this project, I think they both understood this was one of those zeitgeist moments," he says. "With all the other misery and bleakness in the world here was a shiny, upbeat tale. It's a love story, it's corny but that's that. Whether that moment comes again, I really don't know."

"Maybe when it's time for their eldest to get married!" says Rich.

"Are you suggesting a Royal Markosia imprint? Great idea!," Gary says, laughing. "We could create our own universe and run with that on a monthly series. The Windsor's are basically a large family with constitutional powers and plenty of history and constant interest to the public. All we need is to spandex them!

"Seriously, this is a one-off special project. Harry and Rich saw an opportunity and grasped it. Very much of the moment. There may well be similar books in the future but I don’t see it becoming a staple for the current market."

"We have discussed the possibility of releasing other books that are more suitable for a wider audience," hints Harry Markos, "as opposed to the more niche comic market, and we are not letting anyone know in advance what they are!

"What I can assure you is that they will be tastefully produced by quality creators for as large an audience as possible, so watch this space..."

• Kate And William: A Very Public Love Story will be sold in bookshops, select comic stores, supermarkets and all good outlets from April 2nd.

That is so naff but I bet it will be collectable.

That Rich Johnston, has he no shame! Of course, the fact that this'll probably sell scad-loads is going to in no way influence the torrents of abuse that'll be heaped upon his pointy little head. I hope it goes really well for all of them, and wish I'd though of it first!

British newspaper The Guardian has an 'exclusive' here about the project

Is this how you get a knighthood?