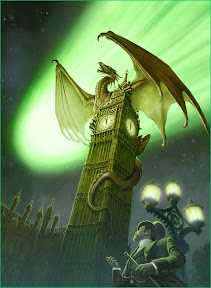 Mirabilis: Year of Wonders, a graphic novel by Dave Morris and Leo Hartas first seen in The DFC comic launched in the App Store for iPad this week.

Mirabilis is a fantasy adventure story for young adults which opens New Year’s Day 1901, when a green comet appears in the sky. As it gets bigger, the line between reality and fantasy blurs. Soon there are mermaids in the Thames, elves in Parliament and a dragon roosting on Big Ben. But then the comet rounds the sun and starts to fade. Will the world be able to go back to a life without magic?

The full-colour graphic novel was originally serialized in The DFC, the weekly print comic published by Random House UK, who financed the production. Mirabilis is the first of the DFC strips (which include Mezolith, Mo-Bot High and Monkey Nuts) to appear on iPad.

The iPad app comprises the first 200-page season in what Morris and Hartas plan as a four-book epic.

“iPad is a game changer for graphic novels,” says Mirabilis writer Dave Morris, a former number one UK best-selling author. “Go into most bookshops in Britain, you’ll be lucky to find the graphic novel section. Even in the US, they’re mostly just available in hobby stores. Yet suddenly the graphic novel market is worldwide, portable, affordable, open to everybody.”

“As soon as we saw the iPad we knew we had to release Mirabilis on this platform first," adds Leo Hartas, the story’s co-creator and illustrator. "The quality is better than print. The colours have to be seen to be believed."

Despite their obvious (and deserved) enthusiasm for the iPad, Dave and Leo aren't leaving print behind. Hardcover volumes of the Winter story will be published by Print Media Productions next year, and serialized print editions are in negotiation for India and the United States.

• Learn more at www.mirabilis-yearofwonders.com
Posted by John Freeman at 3:18 pm