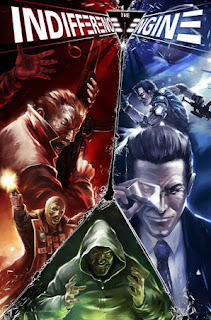 Cy Dethan and Robert Carey's new project, The Indifference Engine, is set to be released soon by publishers Markosia. The team on the book have kindly sent us a review copy of this tightly-written multi-universe-spanning adventure tale -- and it's definitely a book to look out for if you're a fan of alternate timelines and other such SF themes.

Responding to a strangely specific job advertisement, Alan Blake, a distinctly ordinary 20-something suburban slacker finds himself in the middle of an inter-dimensional task force staffed entirely by superhuman alternate versions of himself. Struggling to fit in, he uncovers a conspiracy that strikes at the very heart of the organisation – a conspiracy that only he can stop.

Alan, by any credible standard, is a waste of good skin - a directionless and ambitionless slacker whose single most notable characteristic is that he makes other people feel good about themselves in comparison to him.

Alan considers himself a good listener, but it’s more complex than that. It’s almost like he absorbs other people’s problems and somehow unburdens them. If he weren’t such a loser, that one character trait alone could have made him immensely popular. Still, at least he serves a purpose of sorts. Whatever your own personal flaws or failings, hey – it could be worse. You could be Alan Blake.

Cy Dethan's script is superb on this book, with Robert Carey bringing what the team describe as "just the right combination of subtlety and power that the book needs in the art", with Mel Cook on colours and Nic Wilkinson on lettering.

Speaking at the British International Comic Show last weekend, Markosia's head honcho Harry Markos told the audience of a panel about British comics that he had some 60-plus books in development at present. The Indifference Engine looks set to be one to look out for.