The Dandy - Pulling Back From The Xtreme 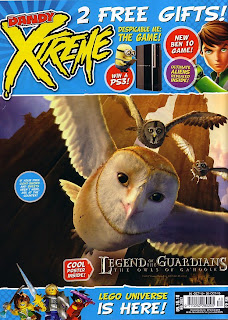 Take a long hard look at the cover of the current issue of Dandy Xtreme. Stripped of its free gifts (five chewy sweets and a small toy light sabre) there is nothing to suggest that it is a comic, let alone the longest running comic in the country.

Indeed the Dandy section of the logo is so small that it almost seems like an afterthought, yet issue 3507 is the current issue a of a title that has been with us since December 1937. The bi-weekly Xtreme makeover came just over three years ago and was criticised at the time. However moves are afoot in Dandyland to pull the title back from the extreme.

The current issue, which is dated 6-26 October and costs £2.50, sets the wheels in motion with this page of Desperate Dan telling the readers that something big is happening with the next issue, but giving nothing away. 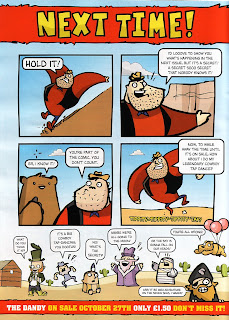 Also giving (almost) nothing away on their blogs are artists Nigel Parkinson and Lew Stringer. While Nigel illustrates Cuddles and Dimples in the current issue, Lew has not worked for the title before and is understandably proud when he says, "The Dandy was the first comic I read as a child. It helped teach me to read, so I'm very pleased and honoured to have been asked to contribute."

In addition to the revamped title, the comic's website will be revamped and already there are new official Dandy Twitter and Facebook pages. This is a new departure for DC Thomson and is something of a quantum leap in the way the company promotes their comic titles.

Time will tell if the children of Britain take to the new format, whatever it may be, but downthetubes wishes the editorial team and their contributors the best of luck with it. With Clint just arrived, new Dandy almost with us, Multiverse about to appear and Strip Magazine due in the new year, it is good to see that publishers are at least willing to give British comic publications a chance. Long may it continue.

Email ThisBlogThis!Share to TwitterShare to FacebookShare to Pinterest
Labels: DC Thomson, The Dandy