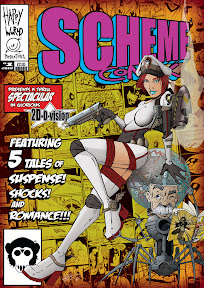 The aim of publishing Scheme is to showcase the best unknown artists working out of the city of Glasgow, and the best way to make sure the work reaches as many people as possible is to give away each issue for free.

The Review: Sometimes, you just have to despair of the mainstream British comics industry. What are the combined talents featured in Scheme Comix doing at its periphery, putting out this energized A5 anthology of science fiction inspired tales? Why aren't there more openings for such creators here in the UK for them to be given space? 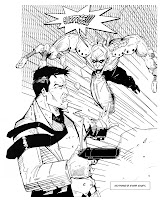 I feel the same way when I pick up titles like Futurequake, Zarjaz and Spandex; or I get sent advance copies of the great-looking titles like Scar Comics superb Madam Samurai. We have such a huge, homegrown range of talent that simply isn't getting the exposure it fully deserves.

It's to the credit of Kev Harper and team that like many other creators they've risen above this sad state of affairs and put out Scheme Comix, showing off some impressive Glasgow-based art talents throughout, even if the actual stories are, inevitably for an anthology, something of a mixed bag. (Script wise, while I'm not so keen on the art, 'Break on Through' is the best written, for me, although there's a line about love in 'Tijuana Bible' that just bursts with hope).

Overall, it's a great promo for some local talents and if you can track down a copy, which shows huge promise.

The A5 format of Scheme Comix #1 also doesn't do the art justice: perhaps the team will reconsider this decision before putting out the next issue (it wouldn't be the first time a fanzine has changed formats during its run).

Helped by funding from Arts Trust Scotland, Kev and team have put together a terrific package of strips, one of the best we've been sent in recent months from the indie press.

I may have some gripes about format and not every strip works, but this is a package from a team of creators that fully deserve wider exposure and acclaim. Check them out.

• Scheme Comix on MySpace (to which we have to ask, why!? The platform sucks!) - currently requires friendship acceptance 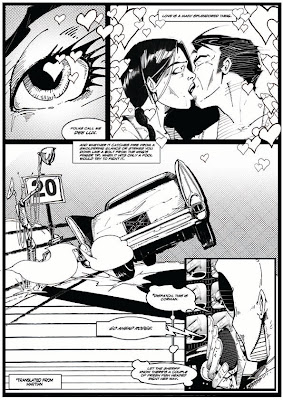 Bought a copy, and loved it. Unique and sharp art, and some excellent strips. Crackin homegrown effort.