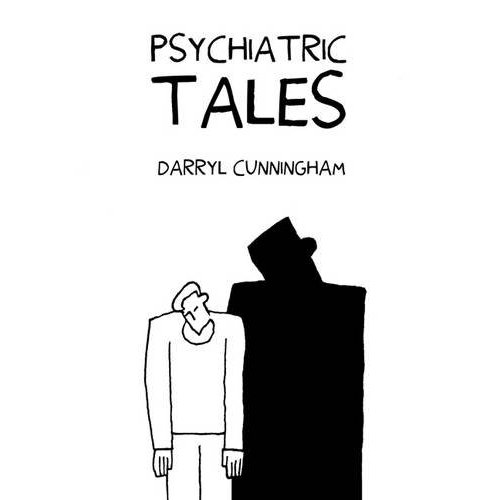 The Book: Psychiatric Tales delves inside the mysteries of mental disorders – presenting explanations and recollections using the cartoonist’s own experiences as both a psychiatric and care nurse and as someone who himself has suffered from depression.

Being able to see the issue from both sides allows Darryl to present matters in a forthright and instantly accessible way which will allow many to understand the trials of both sufferers and those connected to them – perhaps for the first time. Topics covered include bi-polar disorder, self harming, suicide, depression and theauthor also shows how for some famous people mental disorders were part of what may have made them great.

"Media representations of people who suffer mental illness tend to be appalling," notes Darryl on his blog, announcing the launch of the book. "We live in an age where racism and sexism is considered unacceptable. Yet the mentally ill are still considered fair game for ridicule and are subject to the worst kind of prejudice. I had an e-mail recently from a young man who intended to buy two copies of the book when it came out. One for his mother, and one for his step-father. He wanted to show his family that the bipolar disorder he'd been diagnosed with, was a real illness, and that he needed their understanding not hostility"

The Review: Thank you, Darryl Cunningham. Thank you, just for your general talent and hugely enjoyable cartoons, for which the Forbidden Planet International web site has been such a great platform. But thank you, this week, for what publisher Blank Slate rightfully describe as the "frank, hard hitting and moving" Psychiatric Tales: one of the more difficult, more challenging 'comic books' I have read down the years, but a positive experience. 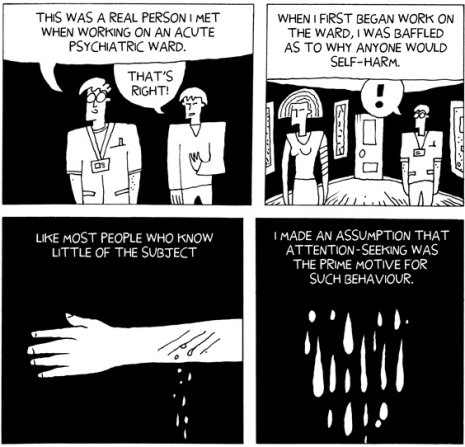 My wife works in care, but she rarely talks much about the clients, respecting their need for anonimity. Yes, she has her favourites - even the difficult individuals have some redeeming factor, occasionally. But she rarely talks about the general 'malaise' of those clients.

In a series of short stories, some of which have appeared online down the years, Psychiatric Tales throws light not just on some of the things she has to deal with, even these days just as an assistant rather than nurse, but also how the work impacts on Carers. How the diseases of the mind affect us all, one way or another.

This is a brilliant, hugely uplifting and thougtbprovoking collection of stories and I heartily endorse it. Congratulations to Darryl on bringinging it to print and top marks to Blank Slate for publishing it.

• Darryl Cunningham's Blog
Darryl Cunningham is the creator of the book Psychiatric Tales, and the web-comics, Super-Sam and John-of-the-Night  and The Streets of San Diablo. A prolific cartoonist, sculptor and photographer, Darryl's work can also be found at his Flickr page.

• Interview with Darryl by Matthew Badham on his darn fine Blog

Sample chapters from the book:

• Cut and Delusions
Posted by John Freeman at 9:23 am