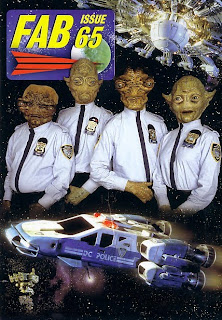 The latest issue of FAB published by Fanderson, the Gerry Anderson Appreciation Society, is now out. FAB is a 64 page A5 full colour fanzine published quarterly and available exclusively to Fanderson members.

Behind a Space Precinct cover the issue covers the proposed new UFO movie, the first part of a detailed interview with actor Shane Rimmer who was the voice of Thunderbird 1 pilot Scott Tracy as well as many other Anderson characters, a breakdown of the Thunderbirds episode The Midas Touch as well as features on Gerry Anderson's live action shows Space Precinct and Space:1999. 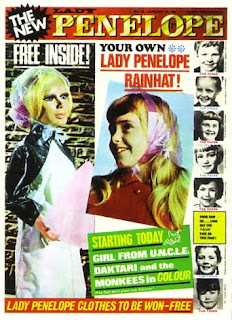 For British comics fans the issue includes the fourth part of SF author Stephen Baxter's ongoing series of articles on the various comics that have featured comic strips from Gerry Anderson series. This excellent and very detailed series reaches Lady Penelope comic and covers both the weekly title and its annuals and includes the rebirth of the title as simply Penelope. The article runs to a 12 colour pages.
In addition FAB 65 includes, on the back cover, the second page of The Secret Service comic strip by artist Jon Davis originally published in Countdown comic.
• FAB Magazine is available exclusively to Fanderson members. A one year membership costs £22 plus the appropriate postage and also gives you the chance purchase the Club's remarkable range of merchandise including books, CDs, DVDs badges and patches. More details on how to join are on Fanderson's website.
Posted by Jeremy Briggs at 7:00 am