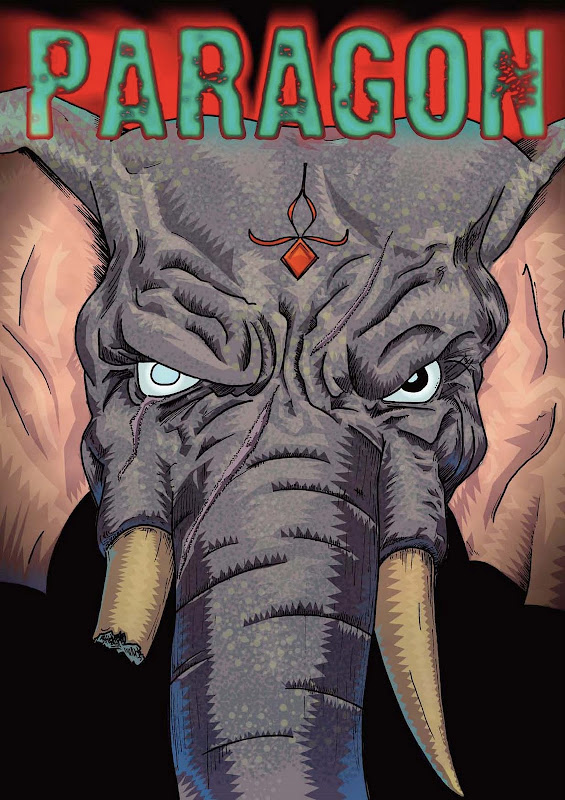 The latest issue of UK indie title Paragon, Issue 5, edited by Dave Candlish is out now.

Featuring the work of artist Stephen Prestwood and writers Dave Candlish (who also provies some art) and The Emperor, with additional contributions from Steven Denton, it's not quite got the variety of Paragon 4 but it still has the energy and exuberance of past issues.

Highlights for me are the ongoing modern re-telling of Hindi legend, Battle Ganesh, and an "Oor Wullie" parody featuring the same character. The Emperor's slick scripting on the main Battle Ganesh story for the issue kicks the proverbial out of the interminable version of the Hanuman myth I recently had to read as part of my day job formatting Indian comics for mobile.

As ever with anthologies, some strips miss the spot for me, let down by disappointing art - although the writing throughout has plenty of promise. One strip that definitely caught my eye was "Julian Ruby", an intriguing tale that has plenty of promise, although for an irregular magazine it could perhaps have moved along a little faster - but there's lots set up for next issue, so we'll see how this one pans out.

Paragon again has the same rough edges I mentioned last time, but it's well worth tracking down for the Battle Ganesh story alone. This is British small press well worth your support.

• Paragon Issue 5 is available for a cheque for £3 sent to Dave Candlish, 5 Cedarway, Whitehills Tyne& Wear, NE10 8LD. Or for more information and to order by PayPal visit the official Paragon blog: www.paragoncomic.blogspot.com

Thanks for that seriously speedy review - I was unsure if I'd managed to pull off the transition to big, space adventure so it is good to hear you enjoyed (and lucky too as there is more to come!!