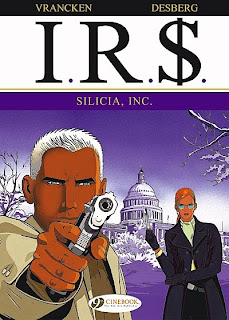 Larry B Max works for the American Internal Revenue Service investigating the international money laundering of organised crime and as such uses his knowledge of high finance to fight international crime for the US government. In California, Max is investigating the mayor of Monterey for corruption when the deputy mayor’s car is involved in a fatal accident after he had just met with a redheaded woman. Arriving at the Mayor’s residence he finds that the mayor has also been murdered.

At the same time, in France, the former president of a far Eastern country is assassinated. It is only at a Senate committee meeting several months later that Max begins to see a connection between these killings and a mysterious company called Silicia, Inc, a company that may be a cover for an assassin. His investigation leads him to the Dutch Caribbean island of Aruba little realising that the redhead that he has only seen fleetingly is one step ahead of him.

IR$ is a album series from Lombard Editions that began in 1999 and which is currently on album 11 in France. Silicia Inc, originally published in 2003, is the fifth in the series and was written by Stephen Desberg, who also writes Cinebook’s enjoyable Scorpion series, and illustrated by Bernard Vrancken. Desberg’s plot merges spy action with the political intrigue of a Iran-Contra style money laundering plot while Vrancken’s art is clear and pleasant to look at without being splashy. 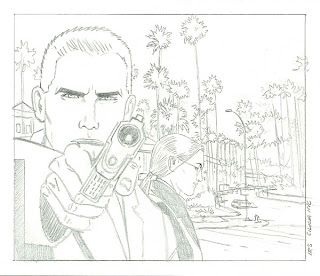 Cinebook have published the previous four IR$ albums at two per book and so while this is the fifth Cinebook IR$ album it is actually their third IR$ book. While that may suggest to you that it is a complete story in one book, it isn’t. Based on their list of forthcoming releases Cinebook appear to have now settled on the one French album to one English book format for their next batch of publications which standardises the page count and price of their books. While this may leave some of the adventure style books as effectively a ‘part 2’ of a story, this is the way that they were originally published on the continent. Silicia Inc is a part one with the story continuing on into the next IR$ title The Corrupter which is due to be published in April 2010.

While this may sound off putting, Silicia, Inc is more than good enough that, having read it, you will want to get The Corrupter to discover just who the mysterious redhead is and how the story concludes.


There are more details of the English language versions of IR$ on the Cinebook website.

More details of the original French IR$ publications are available (in French) on the Lombard website which also has a selection of the original pencil art from Silicia, Inc. including the earlier version of the cover shown above.
Posted by Jeremy Briggs at 7:00 am