The weather gods seem to have it in for comics conventions. Hi-Ex is already infamous for its snow while this year, despite the rains that brought misery to Cumbria, Leeds was dry on the morning of Saturday 21 November but foggy – very foggy. The road layout in the centre of Leeds is, shall we say, challenging for non-locals but fortunately Saviles Hall is opposite the Royal Armouries museum in Clarence Dock so it was just a case of following the brown Armouries signs as they loomed out of the murk. 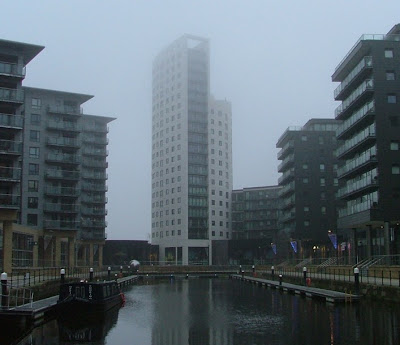 It also seems like the flu gods had it in for convention reviewers. downthetubes Matt Badham, after all the good work he had put into promoting not just Thought Bubble but all the other comics conventions this year, was rewarded with a severe dose of the lurgy and couldn't make it. For that matter neither could Forbidden Planet International’s Richard Bruton as he had been similarly afflicted. With the A team incapacitated, welcome to Plan B. 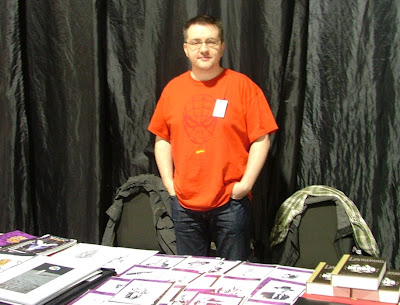 The Dangerous Book For Boys and Scotch Corner artist Graeme Neil Reid had enticed me away from DC Thomson-land and the old comics of Bear Alley into the world of Manga cosplay and American superhero comics to help him out on his table selling artwork, books and sketches, so rather than a full review of Thought Bubble think of this as edited highlights of my few escapes from a sales table. 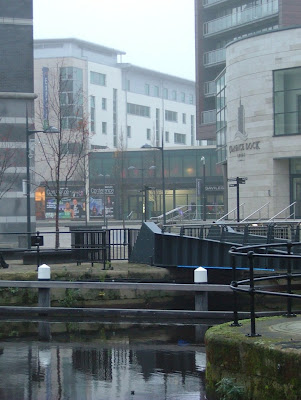 Clarence Dock has been completely redeveloped over the last number of years becoming a marina surrounded by a multitude of modern flats. Indeed Saviles Hall, for all its size inside, is one of the smallest buildings in the whole complex. 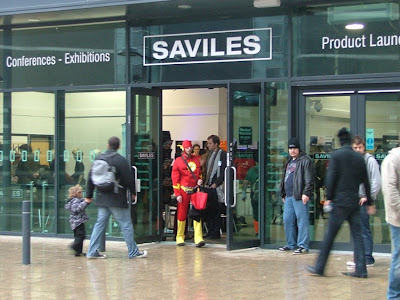 Set-up was simple and swift as we were early, as was Hunt Emerson and a few others at the far end of the artists’ row. That said putting numbers on the sales tables themselves would probably have helped the army of red shirted volunteers find their targets quicker as we soon lost count of the number of them going past muttering “…40, 41, 42, 43…” under their breath as they took yet another artist to their unidentified table. 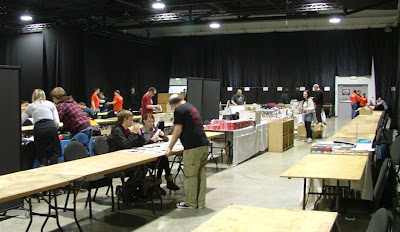 It was the calm before the storm. The doors opened at 10am and half an hour later the hall was busy and it stayed that way for the majority of the day. Indeed even during the talks in the curtained area at the opposite corner from us, the hall remained busy and the queues for the big name guests turned the far end of the hall into a sea of bodies. Reports from those returning from the distant land of Far End suggested the queues were often an hour long and yet, despite the wait, everyone seemed extremely happy with what they came away with. 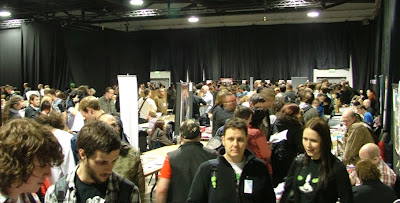 Of course part of the fun for those behind the tables is discovering who your neighbours are and we were lucky to be joined by 2000AD artist Leigh Gallagher on one side and Rainbow Orchid’s Garen Ewing on the other. 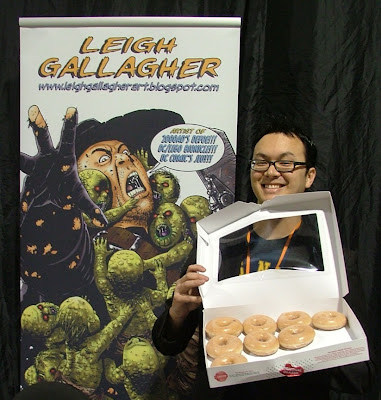 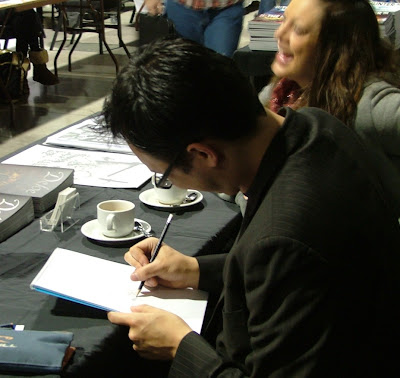 With copies of his Defoe 1666 graphic novel to sell, Leigh spent the day sketching for fans while being fuelled by Krispie Kreme doughnuts and coffee. On the other side, Garen politely had a cup of tea before beginning to sketch in, and autograph, copies of his bande dessinee style Rainbow Orchid graphic novel. 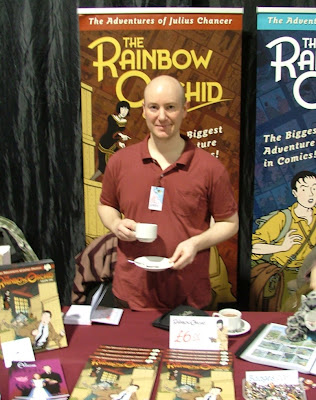 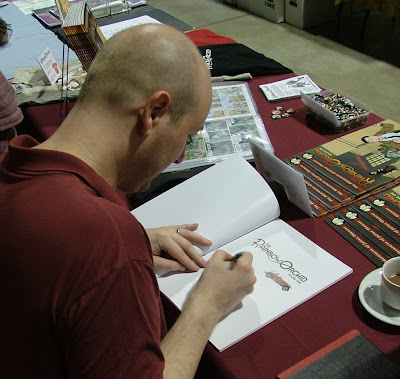 But there was more going on than just Thought Bubble with the academic comics conference Possibilities And Perspectives being held in the nearby Alea Casino which proudly boasted on its exterior of its 2 gambling floors, 2 restaurants and 5 bars. This began at lunchtime by which time Leeds was being drenched by rain. 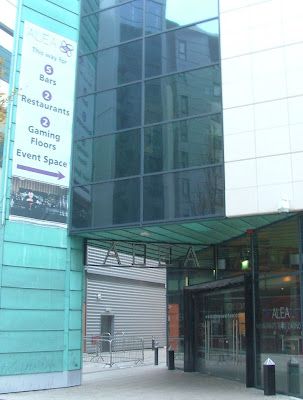 The conference had been organised by Ian Hague of the University of Chichester and ran all afternoon beginning with two keynote speeches, “The Use Of Style And Storytelling Techniques In The Tale Of One Bad Rat” by writer and artist Bryan Talbot and the London University Of The Arts Roger Sabin with “Mavericks and Zinesters: Comics Scholarship in the UK before Comics Scholarship”. In this context ‘Mavericks and Zinesters’ were defined as journalists, collectors, fans and academics writing in a non-academic context, in other words virtually everything that has ever been written about comics throughout the years. This then opened up to a debate as to whether academics should disassociate themselves with comics fandom in general and even, remarkably, from comics professionals as well. While no conclusion to this discussion was reached, considering at that point that there were probably a couple of thousand people at the convention with only a couple of dozen at the conference, the academics probably need us rather more than we need them. 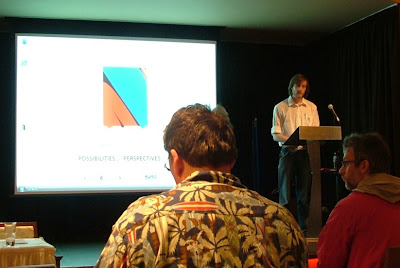 Back in Saviles Hall I took the chance to dive into the sea of people at the far end to catch Dan Dare artist and Scotch Cornerer Gary Erskine doing his best impression of Michael Jackson while trying to keep up with the requests for sketches. One of these days a downthetubes convention review will include a photo of Gary’s face and not just the top of his head – but not today. 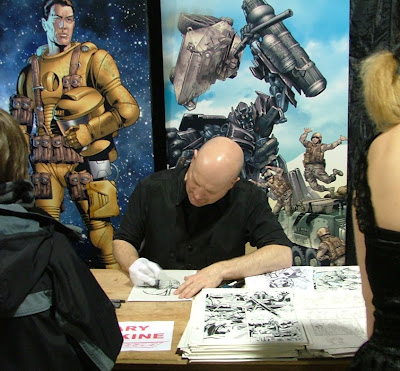 Moving over into small press territory, Dave Evans (or BOLT-01 if you prefer) was on the Futurequake Press showing off the latest editions of 2000AD zine Zarjaz and Strontium Dog zine Dogbreath which has reached an impressive 21 issues throughout its various incarnations. More details of Futurequake’s titles can be found on their website. 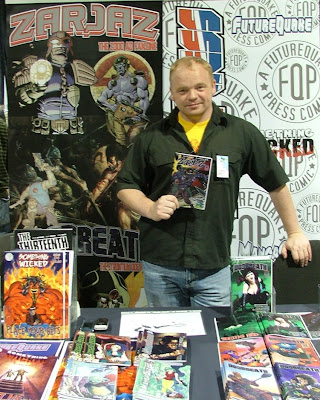 Next came Graham Pearce and his tongue-in-check take on the Action Force/GI Joe style of comics with Sgt Mike Battle: The Greatest American Hero. The Mike Battle title has now reached issue 14 and more details can be found on Graham’s website. 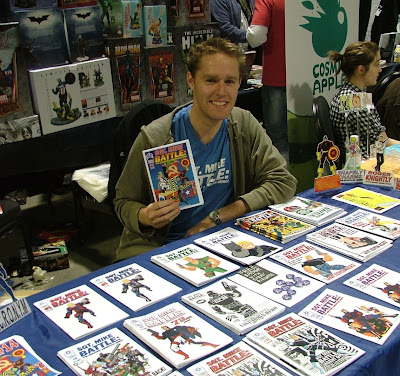 Further up the same row were Steve Tanner and his wife Suzanne of Time Bomb Comics. Steve’s remarkable jackets are almost as bright as Suzanne’s smile and they were showing off their latest titles including the graphic novel The Furies. They also had previews on display of various 2010 titles including artist Keith Page’s London Calling. The artist for Timebomb’s The Sisterhood title, Dan Barritt, was also there selling posters of his work on the title which Steve describes as “space nuns with guns” but could more intriguingly be described as “The Beano does Durham Red”. More details of all Timebomb titles are on their website. 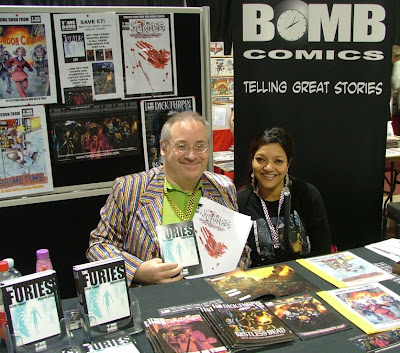 Also over the far side of the hall was Dave Hitchcock selling his unusual horror title Gothic. Gothic has been out for a while now but remains unique amongst British small press in being a 48 page, mainly black and white, tabloid published on newsprint paper which makes it a completely different tactile experience. There are more details of Gothic on Dave’s blog. 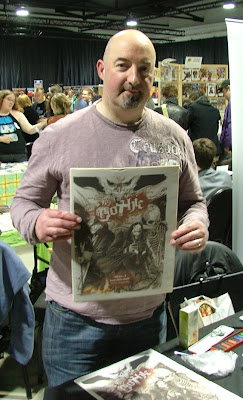 Hidden away in one corner was Francesca Cassavetti of Fabtoons. Francesca is best known for her book on new parents, The Most Natural Thing in the World, which got great reviews here on downthetubes and on the FPI blog, but she also had more titles for sale including Striptacular, Party Pieces and Sole Searching which, unsurprisingly, is about buying shoes. More details of Francesca’s titles are on her website. 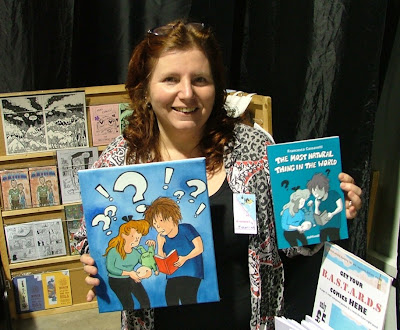 Just over from Francesca was John Maybury and Space Babe 113. These adult themed, tongue-in-cheek, science fiction comics feature John’s very minimalist art which show just how few lines of art it can take to tell a comic length story. As Space Babe converses with her artificially intelligent knickers, the art often appears to show little more of her than a bikini and her hair do, and yet it has a charm all of it own. More details of the Space Babe 113 titles are on John’s website. 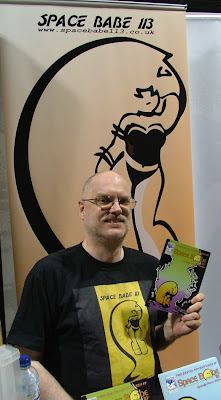 And last, but certainly not least, there was the enormous stall given over to Olivier Cadic’s Cinebook titles. Olivier (in the centre of the photo) publishes English translations of Franco-Belgian bande dessinees albums and in a few short years has grown into a force to be reckoned with. Their titles range from the humourous Lucky Luke to the thoughtful Chimpanzee Complex, via the fantasy of Thorgal and the science-fiction of Aldebaran. With special deals for multiple purchases, Olivier and his team seemed to always be busy with sales as well as fielding the complements of the many purchasers and readers of their titles. With the first of their Spirou and Fantasio titles out now, featuring one of Belgium’s longest running and best known comics characters, as well as the popular espionage thriller XIII due to begin publication next year, Cinebook look as if they have a very secure future ahead of them. More details of their titles can be found at the Cinebook website. 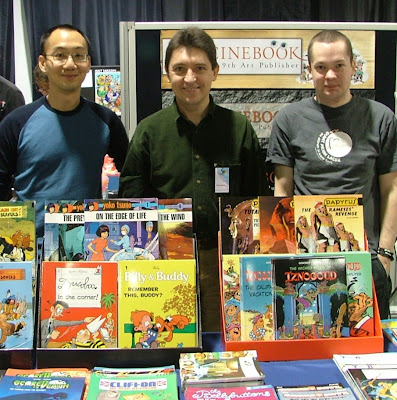 Not having been to a Thought Bubble before I can’t say if it was as busy as in previous years but it didn’t seem to have been too badly affected by the recession as it was bustling with many happy punters.
Congratulations to Lisa Wood and her team of organisers and volunteers for an enjoyable day as well my thanks to Leigh Gallagher and Garen Ewing and their respective partners, Niki and Ellie, for being such good neighbours.

There are many more photos from Thought Bubble on Matthew Kitchen’s Flickr account.
Posted by Jeremy Briggs at 6:43 am

Good report! Nice to see what I missed due to it clashing with the Memorabilia Show. Must try to get to Leeds next year.