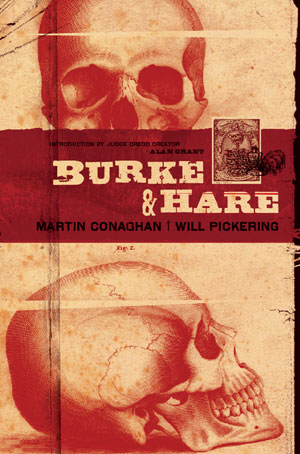 The Plot: Over a 12-month period from 1827-1828 in Edinburgh, Scotland, two Irishmen by the names of William Burke and William Hare murdered 16 people and disposed of their bodies to the eminent dissectionist Dr Robert Knox.

The Review: As Martin Conaghan, writer of Burke & Hare, states in the appendix, 'Burke and Hare does not attempt to solve the crimes or analyse the behaviour of Burke and Hare, but merely to present the facts in as straightforward a fashion as possible, given the available historical and anecdotal information'.

Martin never gives in to the temptation to over dramatise events in a bloodthirsty Hammer Horror sort of way, even when there's ample opportunity to really play up the blood and gore angle. For example, in the space of just two pages, Martin has Burke and Hare dispose of seven people 'in the same manner'. By downplaying their deaths, moving swiftly through the murders rather than choosing to dwell on them, Burke and Hare's actions seem all the more chilling; they're businessmen who deal in death, selling corpses to medical science for a tidy profit. The fact that they have to murder people to obtain these corpses (usually by getting their victims drunk and smothering them) is a mere detail.

Burke & Hare is illustrated by Will 'Something Fast' Pickering, who employs delicate inking and well-researched visuals to capture the feel of 19th century Scotland, treating the readers to sweeping scenery, and moody crosshatching for those darker moments (of which there are many).

The graphic novel also comes with a sizeable thirty page 'companion' at the rear, written by Martin Conaghan, which gives a page by page breakdown of the comic, including precise details of research undertaken, and highlighting which parts are fiction and which are based on fact. Judging by the bibliography, a vast amount of research has gone into creating Burke & Hare, and it's worth anyone with a passing interest in the story, whether they're a comic fan or not, picking it up for the scholarly companion alone.


• Burke & Hare will be launched at the British International Comics Show 2009 on Saturday 3 October 2009. Writer Martin Conaghan and artist Will Pickering will be available at the Insomnia stand to talk about the book, sign copies, and provide sketches. There will also be guest appearances by some of the gallery contributors.

• If you're interested in the world of Burke and Hare, check out burkeandhare.com, a website apparently related to another book, The Anatomy Murders by Lisa Rosner. The site's full of background information on the pair.