In Review: The Rainbow Orchid 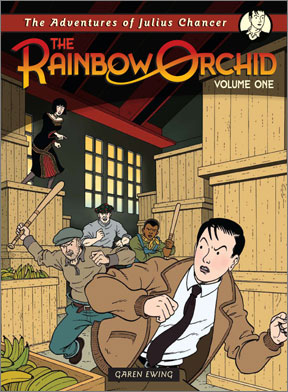 We plugged The Rainbow Orchid

enthusiastically after its Foyles launch (see news story), but David Hailwood has just sent us this review, so here's another plug for the book!

The Plot: The Rainbow Orchid is an ambitious blend of classic storytelling and cinematic artwork in which adventure, historical drama and legend are seamlessly intertwined. In Volume One, follow the story's hero, Julius Chancer, as he embarks on a hazardous quest for the rainbow orchid - a mythical flower last mentioned by the ancient Greek philosopher, Theophrastus, and steeped in legend. His epic journey takes him from 1920s Britain to the Indian subcontinent and its mysterious lost valleys.

The Review: The Rainbow Orchid

– a new graphic novel by Garen Ewing, published by Egmont - involves the adventures of Julius Chancer, the youthful headstrong assistant of historical researcher Sir Alfred Catesby-Grey, as he embarks on a quest to find the mystical rainbow orchid.

Finding a copy of the book just a few days after the launch turned out to be quite an adventure in itself. After globe trotting across several continents (Bognor, Lewes and Brighton), employing various exciting modes of transport (train, and a brisk walking pace), and getting into many hilarious scrapes with the natives (one lone sales assistant in Waterstones, who believed I was after something called ‘Rambo Orchard’), I finally managed to track down a massive towering display containing at least fifty copies of the rascal in Borders.

After four long arduous hours, my quest was finally at an end! But at what cost, eh? What cost?

Thankfully, it wasn’t just the price that made it worth the trek. The Rainbow Orchid is what the Daily Star or some such tabloid might refer to as ‘A Rollicking Rip Roaring Roller-coaster Ride of Excitement, Adventure, Mayhem and Mirth!’

Garen expertly juggles a cast of dozens, all of whom ooze personality and sport brilliantly extravagant names (and in case readers forget who’s who, there’s a handy character reference sheet at the front of the graphic novel).

The artwork throughout is clear and vibrant; simple in style, yet detailed in scope. The story carries universal appeal; children will enjoy The Rainbow Orchid

for its sense of fun and adventure, and adults will enjoy it for the nostalgic Tintin qualities and gentle English humour, with villains being dispatched using bags of flour and pots of paste in a true Jeeves and Wooster fashion.

There’s little to offend and plenty to enjoy, with lots of visual jokes and character laughs (my favourites involving a scene with a drunken lord waving his sword around on the roof whilst spouting a near Churchill-like speech, and the villainous henchmen getting their comeuppance when they’re set upon by a rowdy group of angry French clowns).

Although there are only 36 pages of comic strip inside, The Rainbow Orchid

’s still a densely packed affair; sometimes as many as 13 panels are crammed into a page, and yet the storytelling’s so well paced it never feels like Garen’s trying to squeeze too much in.


Since this is only Volume One of The Rainbow Orchid, we’ll be seeing a lot more of Julius Chancer’s escapades. Good thing too, as it’s marvellously entertaining stuff, and a bally good read at that!


"Part of the joy of The Rainbow Orchid is that it has a massive nostalgic pull, taking me right back to the days when the only comics I could get from the library were these colourful cartoony things from artists with unusual Gallic names. Yet a greater part of my enjoyment of the book--enough to get me to buy it a third time--is that it's just very well put together. It's an exercise in a type of storytelling that we do not see too often in English nowadays..."


"Enchantingly engaging, astonishingly authentic and masterfully illustrated in the legendary Ligne Claire style, this is a wonderful tale that ranks amongst the very best all-ages graphic narratives and although the wait for the next volume might seem interminable the online presence and added value items which can be found at www.rainboworchid.co.uk should keep your bated breath puffing along until then."


"Ewing has mastered the ligne claire style which Hergé and his “Brussels school” pioneered in the 1950s. This means strong, clean visuals, no stippling or cross-hatching, artful use of colour to separate foreground from background, cartoonish figures set against realistic backdrops, and often wordy captions...

"... Yet The Rainbow Orchid is no mere homage. Ewing has crafted something at once reverential and joyous that has a life of its own. With the UK publishing industry slow to adopt the graphic novel form, it’s heartening that someone has given a book like this a chance. "


"The Rainbow Orchid could be, should be, a huge hit for Garen and Egmont. The Tintin connection means it’s got an instant recognition factor, but beneath the obvious beauty of the artwork is an equally great, old fashioned adventure tale. It works for children and it works for us adults. An absolutely cracking adventure story."


"The Rainbow Orchid is an ambitious blend of classic storytelling and cinematic artwork in which adventure, historical drama and legend are seamlessly intertwined. If you like your comics full of mystery and adventure and you love the worlds of H. Rider Haggard, Arthur Conan Doyle, Jules Verne, Edgar P. Jacobs and Hergé, then you'll love this. The Rainbow Orchid is traditional adventure at its best."