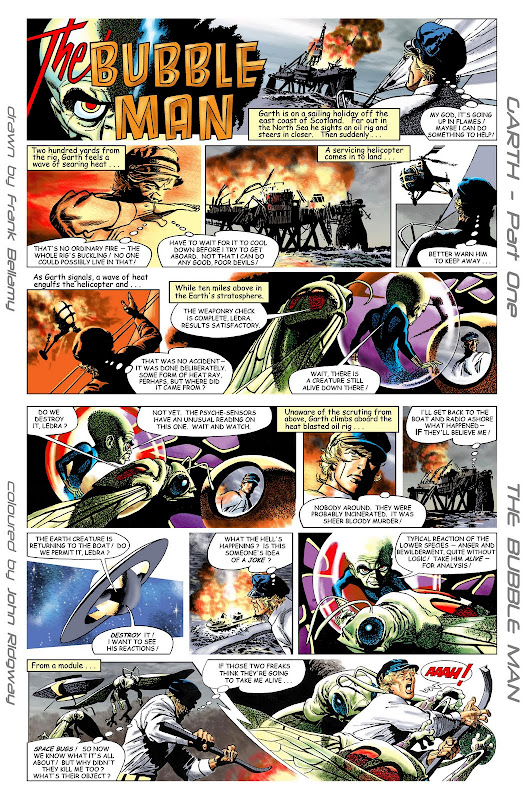 Spaceship Away, the British science fiction comic anthology publishing all-new adventures of the original Dan Dare, adds Daily Mirror action hero Garth to its line up next issue (Click on the image or here for a larger version).

First published in 1943, Garth's time-travelling adventures lasted for over 50 years and covered 167 stories: the character has recently been revived online by the Mirror in partnership with comics artist Huw-J (read our interview with Huw here)

Featuring a range of time travel, contemporary and space adventures, Spaceship Away's initial re-presentation of the character begins with "The Bubble Man", drawn by the late Frank Bellamy and lovingly coloured by Commando and 2000AD artist John Ridgway.

First published in late 1975, the adventure sees Garth captured by a Mekon-like alien hellbent on conquest. The story, contrary to our earlier research, has never been reprinted widely in English and certainly never in colour: John has done a stunning job, with full respect for Frank Bellamy's detailed, crisp line work. 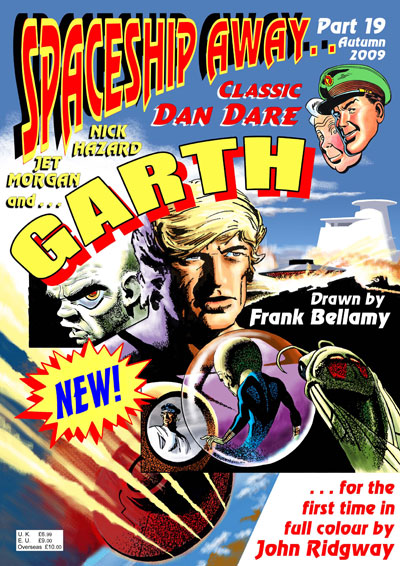 • Spaceship Away 19 goes on sale in October: you can subscribe to this high quality three-yearly title at www.spaceshipaway.org.uk

Nice colour work by John but the printed version won't be resized and squashed like that will it?

No, I had some problems converting the images from PDF - the old pixel ratio aspect conundrum in Photoshop. Thought the final version was ok but obviously not!

I'll re do this later today. My apologies to Rod, John and the team for this.