Of the 365 feet of Apollo Saturn V that launched on 16 July, only the 11-foot high Command Module, Columbia, returned to Earth where it safely splashed down in the Atlantic Ocean 40 years ago today. 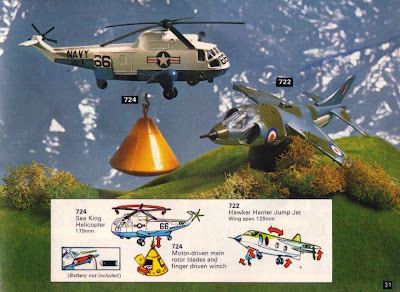 The crew were taken aboard the aircraft carrier USS Hornet by a US Navy Sea King SH-3D helicopter with the code 66 on her side. "Navy 66" was lost several years later in a crash, but her spirit lives on in the toys and models that were produced of her, probably the single most famous of all the hundreds of Sea King helicopters that were built. Dinky produced a die-cast metal toy complete with plastic Apollo Command Module that could be winched up and down while Airfix were considerably more accurate with their 1/72nd scale plastic kit.

Again, Airfix cover art maestro Roy Cross is on top form with the Sea King shown having just dropped off its divers who have climbed onto the floating Command Module ready to attach the winch cable. 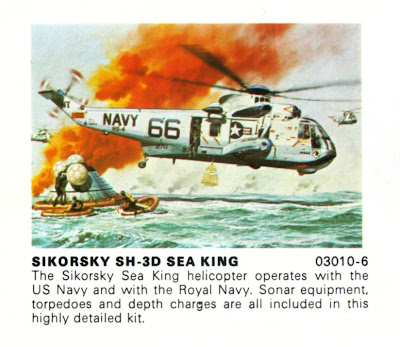 British readers have the opportunity to see a real Apollo Command Module in the Science Museum in London where the Apollo 10 Command Module, which also orbited the Moon and was named after the comic strip character Charlie Brown, is on display.

• Coinciding with Jeremy's countdown to the 40th Anniversary of the first Moon Landing, downthetubes is publishing "Moon Landing 40th Anniversary: A Comics Celebration" - a gallery of illustrations and comic art inspired by space exploration.
Contributions are very welcome: if you don't want to join our forum and upload art but would like to join in with the celebrations, simply send your work to johnfreeman6-moonlandinganniversaryart@yahoo.co.uk. Please ensure images are no larger than 2MB in size and include a brief bio and web link so we can give you deserved credit.
Posted by Jeremy Briggs at 2:00 am