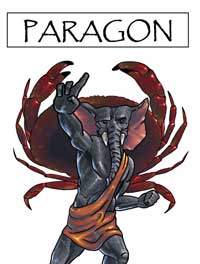 It's an eclectic mix, with "We're on Our Way to Wembley", a humourous "soap-styled" strip drawn by Dave Candish, set in a club bar as six Geordie football fans prepare to head off a major match, rubbing shoulders with a fun update of Indian legend, "Battle Ganesh", drawn by Prestwood. The issue rounds out with "Undertow Part 2", again by Candlish, drawn in style that reminds me of Rian Hughes' work posing the question: just how do you kill a man who is already dead?

Combining a soap opera-styled strip with all-out action, followed by a strip that evokes memories of Twin Peaks (particularly the odd-looking dwarf that turns up) and Alias is the kind of thing only an indie publisher would risk. Of the three, Battle Ganesh, up against some nasty-lookig crab men, is the most 'mainstream' and seems to have proven the most popular strip if the Paragon web site is anything to go by. (I loved this interchange as elephantine-looking Ganesh more human-looking parents arrive: "They don't look very trunky"; "Long story. I had an accident as a baby". That's one way of condesning a massive part of Indian mythology!). "Battle Ganesh" makes mincemeat of the more po-face approach to Indian myth taken by defunct Virgin Comics, and definitely has none of the worthy look and feel of Indian publisher Raj Comics adaptations of the stories!

Art-wise, "Battle Ganesh" by Prestwood (creator of "Hardboiled Hitler", which featured in Violent! Comic) is the most pleasing on the eye: I enjoyed Candish's simpler line and storytelling style on "We're on Our Way to Wembley", but I think he's still developing this style, but I don't think it will have as wide an appeal.

The issue features a fab Battle Ganesh cover, drawn by Dave and coloured by Steven Denton (better known for his work for Massacre for Boys and Futurequake) and also includes an article on forgotten hero, actor Buster Crabbe (the original Flash Gordon) and two ace pin-ups by Paul Harrison Davies, of which his Peter Cushing is my favourite.

If there are rough edges to the issue, they come in the editing of the article about Buster Crabbe, which could have done with another sub, but any comic that features Paul Harrison-Davies is all right by me!

• Paragon Issue 4 is available for a cheque for £3 sent to Dave Candlish, 5 Cedarway, Whitehills Tyne& Wear, NE10 8LD - or you can pay by PayPal.

• Read and interview with Steven Denton
Posted by John Freeman at 3:28 pm