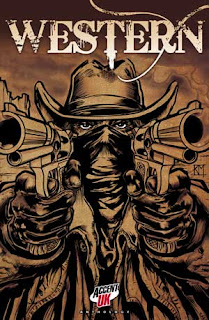 Well, what can I say? The contributors to Accent UK’s latest anthology must’ve played some very bizarre games of Cowboys and Indians when they were children. In fact, I’m willing to bet their games had almost no Indians in them at all. More likely they’d have had zombies, werewolves, Cthulu-esque aliens, demons, mad professors, mutated donkeys, and elves (yes, you heard me…elves!)

Not that the cross-genre approach many of the contributors have taken is a bad thing of course. For starters, it means that even if you absolutely hate westerns, there’s still plenty for you here. From Dwight L. MacPherson (of the brilliant Edgar Allan Poo series published by Image) and Kirk Manley (who also provides a glorious wrap around cover for the anthology) there’s a hellish tale about a cursed man who deserted from Custer’s army, only to discover there’s no escaping retribution from Custer’s 7th Cavalry in the afterlife.

Kate Brown’s Coyote and The Giant looks at first a little out of place in a Western anthology, but fortunately comes with a brief explanation that it’s based on a Native American folk tale, which made me a little more accepting of all the pesky elves and giants, and the distinct lack of six-shooters. The fact that it’s brilliantly written and illustrated also helped (and who wouldn’t want to see elves eating their way out of a giants stomach, eh?).

Indio treats us to A Fistful Of Corpse Meat; a story that’s madder than a bag full o’ hamsters that have been permanently deprived of cheese. This particular offering, as you may have cunningly deduced, is one of the strips that has zombies in it. Not only that, but it’s also got a twenty-two fingered banjo player, an evil maggot eaten villain called Black Frank The Hat, and a brainless knife-wielding demonic saviour named Johnny Slash. Insane story, insane art, and definitely one of my favourites. It’s welcoming news that Accent UK are harnessing Indio’s artistic talent for their upcoming Stephenson’s Robot bi-monthly series, which will certainly be one to watch out for.

"But wait one moment!" I hear you cry, "What if I love westerns, but hate zombies, elves and all of the above?’’ Well, there’s plenty in this anthology for the hardcore Western fanatic as well; tales of love, vengeance, betrayal and honour, which incorporate authentic wild west phrases such as ‘Hands up, you varmint!’, ‘Saddle Up!’ and ‘Damn you and the horse you rode in on!’

For instance, Leah Moore, John Reppion and Dave Hitchcock team up once again to tell the emotional tale of Mrs Henry, a woman who’s cheated on by her husband, and decides to settle the matter in a traditional western fashion – with a gun (none of that messy ‘divorce’ business. Things were so much simpler in those days). The story’s nicely juxtaposed against a marvellously grizzled looking musician belting out ‘oh bury me not on the lone prairie’ on the piano.
Steve Bissette’s Tenderfoot displays a terrific piece of scripting, with excellent character descriptions such as "he looked like the hind quarters of bad luck" and "if his brains had been dynamite there warn’t ever enough to blow his nose".

The Men Who Built The West by Kieron Gillen and Andy Bloor rounds off the anthology perfectly (and also this review) by treating us to the best punchline the Wild West’s ever witnessed, and probably had all 54 of the anthologies other contributors muttering "Damn! Why the heck didn’t I think of that?"

Anyway, to sum up: Western is another solidly put together package from Dave West and Colin Mathieson. Out of the 37 strips contained in the anthology, most are good, none are bad and very few are ugly.

• Western is black and white with a colour cover, costs £7.99, has 190 pages, and is available from www.accentukcomics.com. Or you can pick up a copy from their stall for a "convention special price" of just £7 at the upcoming Bristol Comics Convention.

STOP PRESS: Any pardners moseying down to Bristol can pick up the 196page WESTERN for the special expo price of a 'Magnificent' £7!