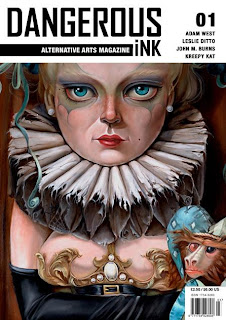 Quite aside from the comics-related interviews -- which include 1960s Batman actor Adam West and 2000AD and one time Jane artist John M. Burns -- there's a smashing number of comic strips and illustration included in the magazine, of which Jenny's Weird Friend by Shug (which first featured in Reet! magazine back in 2004) and Batmook by James Howard are my favourites. (Just as an aside, Volume 1 Issue 4 features a double spread of Kreepy Kat, a strip well worth traking down online).

Balancing the comics with alternative art are interviews with pop surrealist Leslie Ditto and illustrator Andy Hixon, and a creepy comic by Spyros Verykios that balances between the two 'halves' of the title.

Melding comics with alternative art may seem a weird combination for a magazine but it works. The design is excellent, with plenty of space given over to stunning and, on occasion, thought-provoking visuals. The writing is succinct and enjoyable, and the choice of comics from a variety of quarters affords their creators a print platform they might not otherwise have enjoyed.

This is a great looking, well put together title that's well worth tracking down and giving a try.