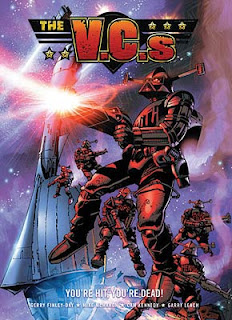 • Things to buy this month - Marvel Heroes #3 from Panini UK, which allegedly features an Iron Man story by Al Ewing and Kev Walker, and Judge Dredd Megazine #280, on sale now in UK newsagents, which has the man himself by Al and Colin Wilson, featuring the first part of Magic Bullets, a story Al describes as "pulsing epic of murder, mayhem and jucidial procedure the way you like it!
"I can't think of a single character I'd rather write regularly in comics than Dredd, so hopefully these few tales are the start of a long and happy relationship. Which means I need to speed up a tad. That's my resolution for 2009, anyway."

• Also worth checking out is Rebellion's The VCs

, 2000AD’s tale of space warfare, in which the 'Vacuum Cleaners' take on the power of the alien Geek empire. Created by Gerry Findley-Day (who also created Rogue Trooper) with art from Mike McMahon, Cam Kennedy, Gary Leach, it's a story in the spirit of Joe Haldeman's Forever War and Pat Mils Charley's War, about the futility of war told from the perspective of new recruit Steve Smith as his steep learning curve throws him into the midst of a vicious intergalactic conflict.Personally, I wsn't a big fan of the strip when it was first published but it has a loyal following nonetheless. The VCs is available from amazon.co.uk and bookshops.

• ICV2 reports Boom! Studios is to offer retailers free comics and other incentives to support its new Hexed series, launching this week, in conjunction with making the book available free online on MySpace. Boom!, who have cultivated several British creators of late, have had considerable success with some of their titles, including Farscape - the first issue sold out in just five days.

• (via Lee Robson): Kieron Gillen of Phonogram fame, amongst others, has posted a small little article on 'breaking into comics' over at his blog, which is definitely worth a butchers for any aspiring creators. And, talking of good posts, Michael Alan Nelson has also posted this excellent piece, "Put Your Armor On", on dealing with criticism in the Internet Age over on Kung Fu Monkey. "I think the trick to dealing with criticism (aside from growing a very thick, impenetrable skin) is to learn which criticisms to take to heart, which to accept with a grain of salt, and which to just simply ignore," he advises. "At first, my default rubric for accepting or dismissing criticism was usually binary. If the criticism praised me and my work, I accepted it. If it didn't, I dismissed it. That approach made sleeping at night a bit easier, but it didn't help me use those criticisms to better my writing." Read the post

• Congratulations to Tony Lee, who has won the award for 'Best Writer' by Regie Rigby in his incredibly coveted 'Jester Awards' at his Fool Britannia column on Comics Buletin, an award that in the past has been given to luminaries that include Garth Ennis, Bill Willingham and Warren Ellis.

• Despite the gloom and doom circulating in the media, Starship Troopers writer Cy Dethan reports that 2009 is shaping up pretty well for him so far. "Cancertown's into 'coming soon' territory now, and there may even be a very exciting extra announcement to make about it before release," he reveals on his blog. "Harlan Falk and Slaughterman's Creed are also developing nicely, and I see that Insomnia have just announced both Cancertown Volume 2 and another graphic novel of mine on their blog, so expect an announcement about The Ragged Man fairly soon.
"As always, there are a few other projects at earlier stages of development, but I'll get to them when there's anything concrete to tell."
Posted by John Freeman at 9:54 am