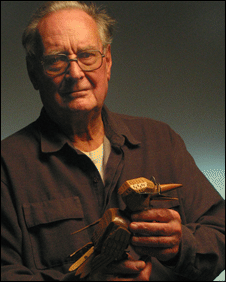 "Once upon a time, not so long ago, there were two overgrown boys called Oliver and Peter.
And Peter lived on a farm.
It was a rather unusual farm because it didn't grow any crops and there were no sheep or cows, but it was the home of Ivor the Engine, Noggin the Nog, the Clangers and of course Bagpuss.
And there they made the most beautiful, the most brilliant, funny old Small Films in the whole wide world or so we like to think..."
(reproduced from the opening page of the Smallfilms official web site)
I was very sorry to hear that Oliver Postgate, co-creator of wonderful childrens animated shows such as The Clangers, Bagpuss and Pogle's Wood, died earlier this week aged 83.

Postgate's partner, Naomi Linnell, confirmed he died at a nursing home near his home in Broadstairs in Kent on Monday.

BBC News reports how Postgate created some of the best-loved children's TV, often in collaboration with the artist and puppeteer Peter Firmin. In a poll earlier this year, Bagpuss, a saggy pink cloth cat, was voted the best TV animal of all-time.


Ivor the Engine, about a little Welsh steam engine who wanted to sing in a choir, was Postgate and Firmin's first creation followed by Noggin the Nog, Pogle's Wood and many more. Bagpuss and The Clangers - rights to which were recently bought by media company Coolbai - remain popular to this day for many fans old and young.

"Oliver Postgate should be remembered as one of the great children's storytellers of the 20th century," commented Ben Davies on the New Statesman web site. Postgate wrote for the magazine's site between November 2006 and February 2008. "Generations were transported by his imagination - and thanks to creations like Bagpuss and Ivor the Engine - were inspired to use their own." (You can read all Oliver's contributions to newstatesman.com by clicking here)

For all his delight at creating many wonderful and characters for television and the young at heart, Postgate became increasingly disillusioned by modern times.

"We now live in a world which no longer needs people," he wrote in his autobiography, Seeing Things

, published in 2001, "a world in which many people have no meaningful part to play in their own lives and have gradually become passengers, inert consumers, nurtured and given identity by supermarkets, spin-doctors, and the bright, brittle media."

He gave much of his money to charity and was a conscientious objector during World War 2, and was very concerned about the environment in later years.

Postgate himself was never one not to play a meaningful part, and brought much joy to many in all that he created.
More Tributes
• BBC Obituary: Oliver Postgate
• In pictures: Oliver Postgate's career
• The Daily Mail: From Bagpuss to the Clangers, he enchanted youngsters... So why did Oliver Postgate fall out of love with TV and his children?
The Daily Mail, 9th December 2008
• The Guardian: Oliver Postgate: a very traditional subversive
• The New Statesman: Thank You, Oliver Postgate
• Socialist Unity Tribute
"What he understood brilliantly is that children are self-aware of the transient nature of their own childhood..."
• The Stage: And when Oliver goes to sleep, children’s television goes to sleep…
• Telegraph Obituary
• The Times Obituary
• Oliver Postgate memorial on lastingtribute.co.uk
Pay tribute to Postgate yourselves

Oliver Himself...
• Oliver Postgate's official web site(?): www.oliverpostgate.co.uk
• Bagpuss creator Oliver Postgate in his own words
The Guardian, 9 December 2008: Oliver Postgate talks about his creations, including how the voice of Bagpuss character Professor Yaffle was based on philosopher Bertrand Russell
• You can read all Oliver's contributions to newstatesman.com by clicking here

I hope this means that they'll bring out a new edition of the book. I kick myself for not buying a copy when it came out.

It's a wonderful biography and the accompanying CD is a gem. If you can track down a copy I thoroughly recommend it.

Hi John.
One link you haven't included is the one for the Guardian piece with all the YouTube clips in. It's at: www.guardian.co.uk/media/organgrinder/2008/dec/09/television-television