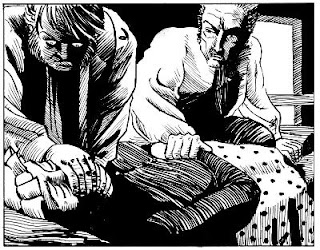 Between 1827-1828 in two Irishmen, William Burke and William Hare, murdered 16 people and disposed of their bodies to the eminent dissectionist Dr Robert Knox at 10 Surgeon's Square, Edinburgh. History often mistakenly references the murderous duo's grave robbing or 'body snatching' activities - when, in truth, the pair never set foot in a graveyard with the intention of stealing a corpse.

Writer Martin Conaghan and artist Will Pickering delve into the murky, misquoted history of Scotland's most notorious serial killers with a research-based graphic novel that unwravels a ghoulish story of medicine, murder and money.

"Burke and Hare could have stepped, in full lurid glory, from the pages of a penny dreadful," says Insomnia's Creative Director Nic Wilkinson. "The tale of the resurrectionists is classic gothic horror in the tradition of Sweeney Todd, Varney the Vampire or Spring Heeled Jack. It also happens to be true.

"Martin and Will are getting back into mainstream comics in earnest, following a 10-year absence, and we are delighted to have them back with us."

Martin Conaghan's first published writing work appeared in Aceville Publications' Comic World in 1992, in the form of interviews and reviews with writers and artists such as Grant Morrison and Steve Yeowell. This was followed by a one-off Tharg's Terror Tale in the 1995 2000AD Yearbook and several short stories for the American publisher Caliber Press, including an issue of their popular Raven Chronicles title. In 1997, he produced a weekly internet column for The Big Issue in Scotland, in addition to writing feature articles for The Herald and other Scottish broadsheet newspapers. He now works for the BBC.

Will Pickering worked on the strip 'Dr Ballard' for the Glasgow-based indie comic Frankly and continues to work on his self-published superhero series Something Fast. He also illustrated Martin's issue of Raven Chronicles for Caliber (entitled 'The Compensators') and has worked in music journalism and magazine editing, and was a candidate for the rectorship of Glasgow University in 1999 (beaten by former EastEnder Ross Kemp). He also produced a strip for the final issue of the popular independent comic Northern Lightz.

"The research that has already gone into this piece is phenemonal," Nic told downthetubes.

Insomnia's other new project, still shrouded in secrecy, should be announced soon.
Posted by John Freeman at 8:27 pm