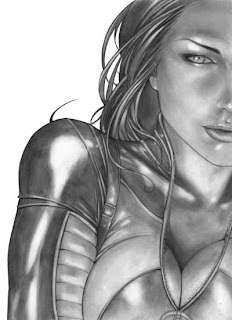 Fresh from the success of Eleventh Hour Volume 1 hitting the number one spot on e-publisher site WOWIO, British indie Orang Utan Comics Studio have announced an exciting new addition to the creative team of The Intergalactic Adventures of Slam Ridley as they prepare to take the Birmingham International Comics Show by storm this weekend.

The adventures of the space adventurer, Slam Ridley, were previously set to be illustrated by the highly talented Simon Wyatt. However, Simon and the OUCS team felt that his vast talents would be better suited to some of their other upcoming projects, including the Viking tale Valhalla, written by Peter Rogers, and further adventures of the unfortunate medieval hero, Danick Drakesbane.

This, of course, left a huge hole to be filled in the creative team on what OUCS hopes to be one of its flag ship titles. Thus, the search began for a new artist to take on the task of illustrating the adventures of the rugged hero, Slam Ridley, and his robotic companion Dan.

Now Orang Utan Comics Studio has announced that the new artist on The Intergalactic Adventures of Slam Ridley will be the immensely talented Craig Yeung, who is probably best known for his inking work on various Marvel Comics books, including Runaways and X-Men: First Class, and is also a highly accomplished penciler.

“While we're sad to see Simon leave the book, and want to publicly acknowledge the huge amount of time and effort he put into helping us develop the world of Slam Ridley, we couldn't be more excited about having Craig on board as the new artist," says series creator and plotter, Ian Sharman.

"We drew up a wish list of artists which included a lot of very talented people who were all working for the big two publishers. To be honest, we weren't expecting any of them to say yes. Craig was right at the top of the list and we were stunned when he accepted the job.”

“Craig seemed to 'get' the idea behind The Intergalactic Adventures of Slam Ridley right away," feels series script writer, Peter Rogers, " and instantly understood the look that we were going for. I'm really looking forward to working with him.”

Orang Utan Comics Studio made the announcement about the artist change to coincide with their attendance at the Birmingham International Comics Show this coming weekend (4th-5th October) at the Think Tank in Birmingham. Co-founders of the studio, Peter Rogers and Ian Sharman will be on hand all weekend to sign copies of their critically acclaimed anthology Eleventh Hour, answer any and all questions about the studio and review portfolios.

Several of the studio's artists, including Simon Wyatt and John Charles can also be found at the OUCS stand throughout the weekend, signing comics, sketching and giving advice to aspiring artists.