• Comics artist Dave McKean was one of the guests at the very damp last night and despite the weather the event was sold out and went very, very well., according to Joe Gordon at Forbidden Planet International, who has Edinburgh Book Festa full repor on their blog. "I'm now looking forward to this Friday’s gig with Alan Grant, Bryan Talbot and Hannah Berry," he says. "It's only second year the world’s biggest book fest has had comics events and it seems to be going very well – staff are all very enthusiastic and it was again a good mixed audience, not just the comics folks, all very encouraging." 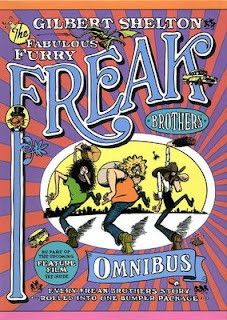 • Knockabout Books, in association with Gosh! Comics, are celebrating the release of the Fabulous Furry Freak Brothers Omnibus with three UK signings by Freaks creator and counter-culture legend Gilbert Shelton. Mr Shelton will be making the following appearances:

The Fabulous Furry Freak Brothers Omnibus represents the definitive collection of the definitive underground comic: 624 pages (including 224 in full colour) for only £20. The Fabulous Furry Freak Brothers themselves are legend; published in 15 languages, with world-wide sales of over 40 million comics and countless items of merchandise, it’s the seamless mix of slapstick and satire at the heart of these strips that have kept them so vital for the past 40 years.

Signings by the Paris-based Shelton are few and far between, so don’t miss this opportunity to meet a true comic (in every sense of the word) genius.

• In movie news, Tom Cruise has just attached himself to the comic book movie Sleeper, based on the Wildstrom/DC Comics title. The film is about an operative whose fusion with an alien artifact makes him impervious to pain. An intelligence agency places him undercover in a villainous organization where he falls for Miss Misery, a member of the group.