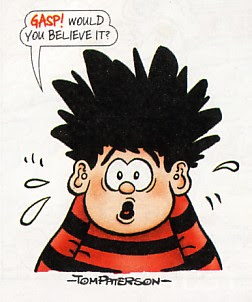 GASP! Would you believe it? The Beano is 70!

Taking place on 30 July 2008, which was The Beano's 70th birthday date, this event had been billed as the official opening of the Happy Birthday Beano exhibition in the University's Lamb Gallery. Since the free exhibition had already been open to the public for several weeks, the evening was more of a celebration of all things Beano.

In the lecture theatre used for the 2006 Biff! Bam!! Crikey!!! comics conference, after an introduction by the Dean of the School Of Humanities, there were four talks. The university's Museum Services Curator Matthew Jarron began with his Pre-History Of The Beano talk from the 2006 conference which took the history of illustration in Dundee publications from the pioneering illustrations of the Tay Bridge tragedy in 1879 via the first issue of The Adventure story paper in 1921, to the introduction of The Dandy and The Beano in 1937 and 1938. 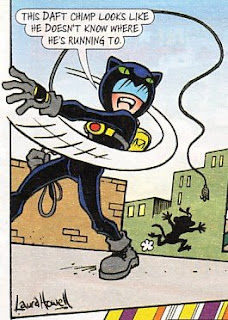 Next up was the university's Dr Chris Murray, the event organiser, resplendent in his pink Hawaiian shirt and red tie. As a professional lecturer he took the audience smoothly through the early establishing years of The Beano, the difficulties of wartime, with its effect on the stories and the publishing schedule, and then on into the heydays of the 1950s with massive sales figures and the introduction of Dennis The Menace.

The event then moved from The Beano's history to its modern day with current artist Laura Howell telling the audience of getting her break into the title in 2006 via inking Hunt Emerson's Ratz, a strip that she still writes today. She then developed Johnny Bean for the comic, a strip that she described as “ASBOs in Trumpton”. Since then she has drawn Les Pretend, Minnie The Minx and she concluded by showing the inks for the Billy The Cat strip that she had produced for the 70th anniversary issue and comparing its comedic tone and Manga styling with a page of the original adventure styled Billy The Cat from the 1960s. 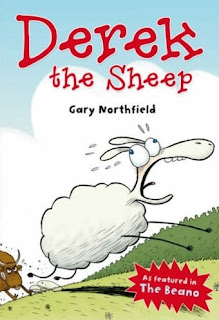 The lecture theatre events concluded with Gary Northfield, the writer/artist of Derek The Sheep, discussing his small press comics and the fateful meeting with then Beano editor Euan Kerr which got Derek into the comic while allowing Gary to retain the rights to the character. He told the audience of Norbert Le Mouton, the French publication of the character and showed a preview copy the Bloomsbury hardback which reprints the first thirteen Derek stories from The Beano and which will be available in September 2008.

After a short adjournment for drinks, the evening continued upstairs in the mezzanine level Lamb Gallery where the Happy Birthday Beano exhibition was located. At this point Chris Murray introduced Morris Heggie, DC Thomson's archivist and former editor of The Dandy, who began a gallery talk walking around the exhibition discussing the original art which was framed on the walls. 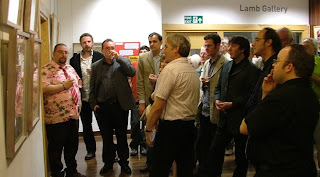 It was when he began to ask questions to certain people there that the realisation dawned that there were long time DCT artists amongst the crowd, some of whom then passed comments on their own work from up to fifty years beforehand.
With help from current Beano editor Alan Digby and artist David Sutherland (Bash Street Kids), Morris worked his way round the gallery from a 1934 strip of Big Chief Whoopee The Crafty Cree from The Skipper to the initial sketch for the 70th anniversary Beano cover, featuring Wallace and Gromit as well as Dennis and Gnasher, in an informative and relaxed manner to a rapt audience who showed their appreciation at the end. In addition to those already mentioned Dave Torrie, former editor of both The Dandy and The Beezer, was in the crowd as well as artists Jim Glen (Lord Snooty), Jim Petrie (Minnie The Minx), Willie Richie (Barney Bulldog) and John Dallas (Beryl The Peril). 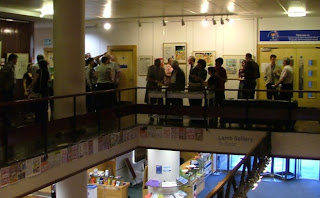 For me the lasting image of the evening was not of the artwork hanging on the walls but rather of watching David Sutherland and Gary Northfield standing beside each other after the talks sketching for young fans, one drawing Plug from The Bash Street Kids and the other drawing Derek The Sheep. It summed up both the heritage and the future of Britain’s best known comic.

• The Happy Birthday Beano exhibition continues in the Lamb Gallery of the University of Dundee until 20 September 2008 and entrance is free. Opening times are on the University website.
Dennis The Menace and Billy The Cat (c) DC Thomson and Co Ltd
Posted by Jeremy Briggs at 8:49 pm