Win Roy of the Rovers Books! 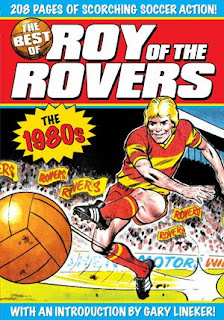 The UK’s teams may be missing out Euro 2008 this summer, but Titan Books is bringing football home with the publication of a new series of books collecting the comic strips of Britain’s most famous fantasy footballer: Roy Race.

The Best of Roy of the Rovers: The 1980s [Titan Books, 13 June 2008, £9.99] is the first in a brand new series of bumper volumes collecting Roy’s thrilling comic strip escapades. Featuring some of Roy’s greatest matches and adventures from the early 1980s, this incredible collection is a must-have for footie fans of all ages. Thrill once more to the roar of the crowd, as Roy and Melchester Rovers face trials and tribulations on and off the pitch, including the threat of relegation, Roy’s marriage troubles, and an assassin’s bullet!

Collected together with an introduction from Gary Lineker, these are the tales that endeared Roy of the Rovers to a generation.

WIN ROY OF THE ROVERS BOOKS!

Thanks to the great team at Titan Books, downthetubes has THREE copies of the Best of the Roy of the Rovers to be won!

Simply answer the question below and send us your entry by email via to arrive no later than 12 noon GMT Thursday 19 June 2008. (Alternatively, send your answer on a postcard to Roy of the Rovers competition, First Floor, King's Yard, High Street, Lancaster LA1 1LA). Good luck!

Who is credited with creating Roy of the Rovers?

• More about Roy of the Rovers on the main downthetubes website
Posted by John Freeman at 11:56 am

Email ThisBlogThis!Share to TwitterShare to FacebookShare to Pinterest
Labels: Competitions, Roy of the Rovers, Titan Books

My copy arrived last week, it's a great little edition (though sadly it stops short of the Emlyn Hughes & Bob Wilson/kidnap/earthquake/Spandau Ballet storylines), not even Royal Mail's shameful treatment of it can take that away :-)