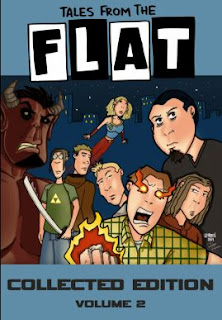 In the first of a series of creator interviews to mark the upcoming NoBarCodes event next Saturday in Camden Lock Market, London, David Baillie talks to Tales from the Flat artist Oliver Lambden...

downthetubes: Hey Oliver! Hope you're well! Now I've known you for some time. In fact - I haven't said this before, but these months we've had together - they're the happiest of my life. But how would you introduce yourself and your work to someone at NoBarCodes next Saturday in Camden Lock Market who has never heard of you before?

Oliver: I'm Oliver Lambden and I draw Tales From The Flat, which is written by my good friend Laurence Powell (currently adventuring away in Thailand). It's part autobiographical, part fantasy and all round kickass. It's about a group of very close friends who share a flat in a fictional city. They go through the usual flat sharing malarky but also fight demonic kebab shop owners and chav ninjas, things like that. It's good fun and should be read by everyone.

downthetubes: You've been rocking the Camden Stall on a Saturday for some time now - how's that been for you?

Oliver: Cold but getting warmer! It's been great seeing guys like you on a more regular basis and getting our comics out to "regular" people as well. I love being part of it, it feels special, every weekend it genuinly feels like we're doing something really damn cool.

downthetubes: What are you looking forward to most next Saturday?

Oliver: No Barcodes is going to be like every Saturday at Camden Market but on a much bigger scale. My wallet's going to take a beating. I'm very much looking forwards to seeing what's on show and meeting some lovely new people and it'll be nice putting faces to some familiar names.

downthetubes: Anything you're dreading?

downthetubes: What are your (comicy) ambitions - where do you want to be this time next year?

Oliver: It would be nice if Tales From The Flat was legally the only thing anyone could ever read. All other reading materials would be burned and TFTF would be on every bookshelf and next to every toilet in the land (as reading material, not loo roll substitute preferably).
On a more realistic level? I've no idea. I want to draw more comics working with different writers, trying new things, making myself better. All that jazz.

downthetubes: And finally - any message for the people out there, reading this, wishing that they too were a young, cool and sexy comics creator?

Oliver: Anything is possible. I was once a wreck of a human until I started making comics. Anyone can be as cool, hip and sexy as I am with a little effort. The best way to start out would be to actually buy the first Tales From The Flat Collected Edition (available from Forbidden Planet International) and you'll find you'll be a little bit sexier because of it. It's the truth.

Oliver: No David Baillie, thank you!

• No Bar Codes is a one day indie comics event taking place at Camden Lock Market this Saturday. Click here for more info.

• Modern Monstrosity can be found at www.modernmonstrosity.moonfruit.com and No Bar Codes next week. Tales From the Flat has been nominated for so many awards at this point in the game it's the small press equivalent of Manchester United. Except everyone loves it.

• David Baillie is over at www.davidbaillie.net and the awesome new hardback edition of his fantasy adventure Tongue of the Dead debuts at No Bar Codes. Click here for an exclusive discount voucher redeemable on the day!
Posted by John Freeman at 12:04 pm