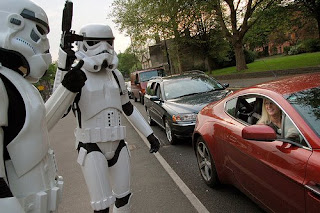 As promised: David Hailwood’s account of this year's Bristol Comics Expo -- although it seems he managed to do more avoiding of the event than actually being at it!

(Which, by the way, is par for the course when you're a comic creator...)

For a round up of other reports we've found, click here.

All photographs © D’Israeli (Matt Brooker) and used with his kind permission (for more, visit his Flickr site).


As I stepped off the train at Bristol Temple Meads, the smell of spot-cream and spandex filled the air. I thought to myself ‘this must be the place…this must be Bristol International Comics Expo!’

My suspicions were confirmed when, moments later, I found myself being unexpectedly frogmarched towards the queue by a small legion of well-armed Storm Troopers. As an old lady with a poodle trundled past, the person in front of me felt inclined to comment ‘Great Storm troopers. But the Hoth monster’s rubbish!’

After a ten minute wait and a nifty bit of queue jumping (adopting the much used procedure of pointing excitedly at the sky and yelling ‘Holy crud! It’s the Battlestar Galactica!’), I finally got inside.

Having missed the 2000AD panel, I decided to say a quick ‘hello’ to Adam Grose and Tony Suleri of Clown Press, who were promoting their Cosmogenesis collection and Flood charity comic. After a long overdue chat with Tony that rivalled the Lord of the Rings trilogy in length, I suddenly realised I’d now missed all the events that I’d wanted to attend. Not only that, but I’d only got as far as two foot through the door. I resolved to quicken my pace and explore this mighty comic convention that I had spent six whole Earth pounds to enter!

I made it as far as three tables down, when I bumped into Dave Evans of Futurequake (and just about every other 2000AD related fanzine going). Being up for another one of them Eagle Awards, Dave’s stall was a hive of activity and I just about managed to introduce myself before I was lost in a mass of eager young creators desperate to display their work inside his publications.

Another table that seemed to be doing a healthy amount of business was Accent UK. Their newly released Robots anthology displayed the usual wealth of UK talent, and rumour had it several thousand copies of last years Zombies anthology had already been sold, which is quite remarkable for a small press offering.

Shane Chebsey was there as always, promoting every small press comic that didn’t have its own stall (and several that did) under his Smallzone banner. Shane was the first person to ever publish any of my work, and a very brave man for doing so (since it involved the adventures of a barbarian with a big chin and quiff, named ‘Iron Bru’). It’s nice to see that his commitment to the small press and UK comics industry still hasn’t wavered after all these years.

Having seen a sample of what’s hot in the small press world, I decided to check out what was hot in the world of pro comics, and ventured towards the Ace Comics stall. After a chat with one of the sellers about the merits of buying trade paperbacks instead of comics when you find yourself in a relationship with a comic-hating spouse, the mid-day sun began to make its presence known. Leaving the Ace Comics salesman contemplating the merits of trying to make sales whilst standing in a bucket of ice-cold water, I decided that now would be a good time to try and discover the Ramada Hotel where the rest of the convention was being held.

Since the way wasn’t very well signposted, I opted to use the age-old tactic of following the freakiest looking person I could find. This, I deduced would either lead me to the Ramada or to a long dark alley where I’d get knifed. Since there was a bar located in the hotel, I considered it worth the risk.

I made it there with minimum flesh wounds, and met up with Welsh comic artist Neil Alexander, who’d made even less progress than me. So far he’d visited three pubs and no doubt several off-licenses on route. We decided a fourth pub would make it a nice even number, and headed for that culture capital of the beer ‘n burger trade…Weatherspoons.

On our way there we encountered a lone Storm Trooper in the car park, who’d become separated from the pack. Having seen a lot of movies, we knew how this was supposed to go. We were contractually obliged to jump him, steal his outfit and attempt to overthrow the Imperialist swine who’d taken control of the comic convention. Fortunately, I’d only had one pint and could tell this was probably a bad idea. Had it been a man in a Yoda outfit, I’d probably have gone for it; alas, it was not to be so.

After one of Neil’s legendary shortcuts, which took us across several continents and on many grand adventures, we finally made it to Spoons. As the gathering grew in number and the beer began to flow, the conversation took up appropriately nerd-like topics. After a heated debate about whether The Day The Earth Stood Still, The Day The Earth Caught Fire, Day of the Dead and Day of the Triffids all took place on the same day, Neil asked the immortal question: ‘Would Captain Kirk shag an Ood?’ The general opinion seemed to be ‘Yes, he most certainly would. Even if it was dead.’

As it was now almost 5.00pm and I still hadn’t attended any events or brought any comics, I decided to take my leave. I hot tailed it back to the main hall, hoping to pick up a few bargains. Instead I once again got chatting with Tony and Adam, and by the time I’d finished the convention was closing.

As I caught my train home I realised the only comic I’d actually brought at the convention was Adam and Tony’s Cosmogenesis collection. Clearly they’d used some sort of Jedi mind-trick on me, to prevent me from purchasing any comics other than their own! You’d think with so many Stormtroopers around, these sort of underhand dealings wouldn’t go on. It wouldn’t have happened on Vader’s watch, oh no.

Anyway, to sum up, I had a marvellous time at the convention, met some smashing people, had some great beer and a truly awful burger. Perhaps next year I might actually get to attend an event or two, but somehow I doubt it. I will once again be quaffing ale with the best of them!