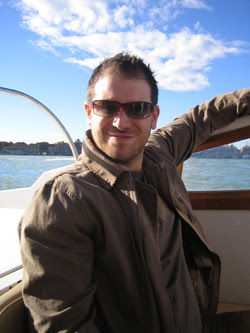 Abercrombie is a freelance film editor, who after several knock-backs from literary agents, was eventually signed by Gollancz in 2005. Last Argument of Kings is the final instalment of his epic fantasy First Law trilogy of books. You can read an extract on his web site. The first book, The Blade Itself, has now been published in eight countries and
was described as "Delightfully twisted and evil" in a review in the Guardian by John Courtnay Grimwood.

His work has been described as the kind of thing Quentin Tarrantino might make if he made sword and sorcery films, and Lisa Tuttle acknowledged the gritty edge to his world in her review in The Times for The Blade Itself. '[He has] an awareness of violence that is very contemporary... there is much to reward the reader."
Posted by John Freeman at 1:32 pm