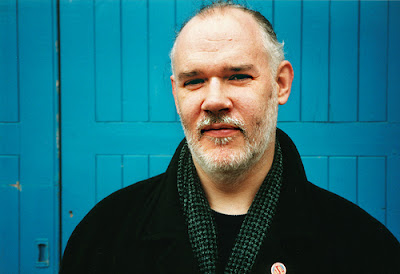 Above: Steve Whitaker. Picture courtesy of Matt Brooker and used with permission

(Last updated 2/3/08): British artist and colourist Steve Whitaker is, I am deeply sorry to report, no longer with us.

Steve died on Thursday after becoming unwell on the way to his doctor's. The loss has left family, friends and the comics fans who knew him - and who could forget him? - reeling this weekend.

I'd known Steve, whose professional credits included colour work for Marvel UK and the DC Comics edition of V for Vendetta and author of Encyclopedia of Cartoon Techniques for over 20 years, although not as well as some of the regular readers of this web site.

"Steve was not only one of the finest colourists Britain has ever produced, but a great artist, a scholar of the comics medium, and a great teacher, too, who I worked with at The London Cartoon Centre in its various incarnations," recalls friend and colleague David Lloyd. "He was a terrific guy - generous to a fault, full of enthusiasm about this medium of ours, and great company over a Guinness or three. He'll be sorely missed by all who knew him."

"He did some great colouring for me and Mark Farmer on the Ladybird Books [we worked on]," artist Mike Collins reflects, "and I always thought he was a talent that never fully got to express himself. Some of the drawings he did for himself were classy, European style, which really wasn't in favour during the whole Image boom."

"Steve was a terrific artist and a good guy, kind, helpful, generous, all that," writes Neil Gaiman. "He would have been the colourist on Sandman but he never turned in the sample pages he was given to colour, because they weren't quite perfect yet, and by the time he was nearly satisfied with them someone else already had the job. I learned a lot from that.

"I learned a lot about comics, about the history of comics, about strip cartoons, from Steve. I wish he'd been willing to draw more, to let it go, to feel more comfortable making mistakes in public. Mostly I wish he'd done more comics."

Most recently, Steve was experimenting with vector art (see below), and continued his lifelong work at explaining and discussing the process of comics creation, particularly colouring, to various comics groups and friends via the web. 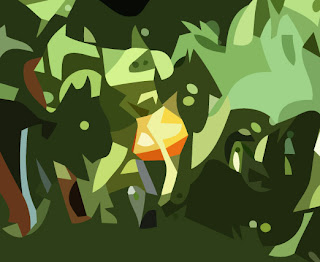 I will remember him as a bear of a man, always full of enthusiasm, even in the midst of some crisis or other, and always fervent in promoting and educating others on the comics art. A regular attendee of recent comics events such as Caption, in the 1980s and 1990s he was was one of the driving forces behind many small press initiatives such as the London Cartoon Centre and the British Amateur Press Association, and an inspiration to so many comic creators and friends.

In his own biography for his livejournal page, he reveals he grew up in early 1960s Swanley, Kent and London, and attended secondary school in the late 1960s in Northampton. After doing a foundation in Bedford he achieved a BA Hons Degree in Painting at Chelsea 1975-78.

He did a lot of odd jobs including gardening, working in a toot shop, specialist decoration, and collaborated on a couple of art magazines in the 1980s (Cipher and Atlas). He worked as a colourist for Marvel UK, Oberon BV (Holland), DC Comics, Fleetway, Tundra, Valiant/Acclaim, winning awards for colour work on V For Vendetta for DC Comics and The New Adventures of Adolph Hitler for Crisis. He was a committee member and Vice Chair at the Society of Strip Illustrators in the 1980s and early 1990s.

A man whose comics knowledge was second to none, he wrote several comics obituaries for The Guardian and Independent. As a contributor to Fantasy Advertiser, his friend and editor Martin Skidmore recalls an occasion when he and Steve interviewed Will Eisner together. "His graphic novel The Dreamer had just come out, a tale of his early life with all the names changed. Steve was checking a couple of identities with him, and Eisner's jaw literally dropped. 'How can you even have heard of that man?' [he declared]. 'How can you know that? I thought I was the only person in the world who would know that was.'

"I have never met anyone who knew more about comics than Steve, no one to compare to him at identifying artists."

As mentioned above, Steve taught at the London Cartoon Centre as well as East Ham College, Central School of Art in the 90s and Noughties, writing the Encyclopedia of Cartoon Techniques in 1993.

"For me personally, he was the nearest thing I ever had to a mentor and he was a great friend," recalls Nick Abadzis, responding to Tom Spurgeon's tribute on The Comics Reporter. "He once said to me of another, mutual friend, "It's a stupid world and it hurts him." In some ways, this was applicable to Steve himself, too -- he was a very warm and generous man with a keen mind that was interested in absolutely everything.

"He was also possessed of a disarmingly ropey and charming wit. He taught several generations of comic artists and cartoonists and although there's not a great deal of his work that saw print, he was the kind of artist many of us aspire to be."

Like Nick, Steve's friend Andrew Littlefield notes he always made it clear that sharing - knowledge, time - was more than half the pleasure and always the whole point. He loved people who could match his own passion and thirst for knowledge, and he was almost as good a student as he was a teacher.

He once came to Lancaster to run a comics workshop for Lancaster Royal Grammar School for the Lancaster Literature Festival, while I was its director, back in the 1990s: I recall the incredulous look on the faces of some of the school kids as he came through the door - who was theis giant and scary man and how could he be a teacher of anything? - but within minutes his enthusiasm for his art consumed them. David Novell, the teacher who had organised the event with me, told me it had got kids interested in creative writing who would never normally have entertained the notion, and that in itself is a testament to Steve's talents as a creator, and a man.

"Anyone who was around the London comics scene in the 1880's and early 1990's will remember Steve; at 6ft 4in he was hard to miss in his trademark long dark overcoat," writes Matt Brooker (aka D'Israeli, who kindly supplies the photograph of Steve illustrating this post). "He was a world-class colourist who will probably be remembered professionally for his work on the DC Comics edition of V for Vendetta, but he was far more than that; a brilliant draughtsman, painter, teacher and historian of comics, raconteur and ace punster. He was also my best mate."

"In person, he was self-deprecating and dismissive of himself and his abilities," says writer Jenni Scott in her tribute to Steve, "but turning the subject onto the things he knew so much about - obscure or weird mainstream comics, eclectic music from tropicalia and jazz to no wave and Charles Wright and the 103rd Street Rhythm Band - and he was warm, open, a great teacher, a great communicator. He introduced me to Os Mutantes, Astor Piazzolla, and drawing with a firm line. His workshops for CAPTION were inspiring."

"He was incredibly knowledgeable about comics and artists and the techniques of how to put comics together, knowledge," Steve Holland concurs in his post about Steve on Bear Alley, "which he shared with hundreds of students as a teacher at the various incarnations of the LCC, at East Ham College and many workshops at conventions and festivals."
Steve Whitaker was an extraordinary talent who will be so missed. There should be more people like him in this world and sadly now there is one less. 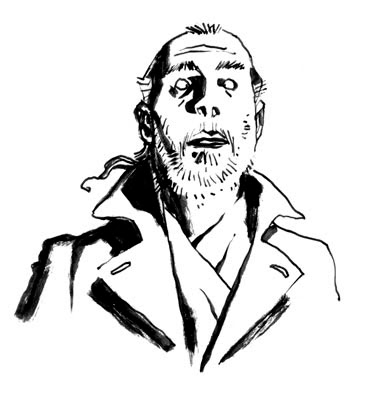 Steve's Art Online
• Right: Steve's self portrait, from his flickr site, which he wryly described as "the blind cartoonist".
As of February 2008, examples of Steve's recent art could be found on his livejournal page and flickr album.
• The Saga of the Man Elf gallery includes three covers are by Steve - the first three on the page.
• Charlton Action HeroesSketches of the Charlton Action Heroes drawn by Steve for a UKCAC comic convention booklet in the early 1980s. Courtesy Mikel Norwitz.
• The Last Party on Earth by Jean Marc L'Officier, illustrated by Steve
• Spellbinders #6 Cover: Nemesis the Warlock

Imagery
• Darryl Cunningham has dedicated this episode of his comic, Super Sam, to Steve
• Tammy D has posted photographs of Steve and Paul Schroeder
• Motoko Brimmicombe-Wood (a photo of Steve)

Steve Whitaker was one of the stalwarts of the comics British Amateur Press Association. I'm pretty sure that he was always in the apa whenever I was, from about 1990 onwards.

B-APA was wound up in 2004. However, there was a special in 2005, a commemoration issue when Andy Roberts died, to which Steve enthusiastically contributed. We can hardly do less for Steve. So I will be editing a commemorative special of B-APA, to be available at CAPTION, a convention Steve always supported. Obviously, I'd like as many ex-B-APAns as possible to contribute. But I don't want to restrict contributions to ex-B-APAns; I'd like anyone of Steve's friends who wants to be part of this to feel welcome.

If you want to contribute, please contact me at keentony at hotmail dot com. I'm looking for contributions of 1-2 pages, by mid-July, preferably as camera-ready copy. Thanks to those who have already agreed to be involved.

Apologies if you end up seeing this in several places.