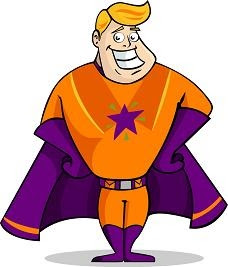 Northern Ireland seems to be having a bit of a fad for superhero characters this year. After the CPYU educational comic The Super Six comes an as yet unnamed superhero produced for the Grand Orange Lodge Of Ireland.
Sporting an orange sash and what the BBC website describes as “a trendy purple cape”, the character is to be used by the Orange Order to generate interest in the junior section of the organisation, and they have launched a competition to name him.
However popular the new superhero may prove to be, he is unlikely to eclipse the organisation’s other hero King William III, or William of Orange, who died in 1702. William III is probably best remembered in England and Wales as the William of William and Mary, while in Scotland (where he was William II) and Ireland (where he was William I), he is known as King Billy.
With so many names to chose from for their old hero, surely there should be no difficulty in finding just one for their new hero!
Posted by Jeremy Briggs at 12:51 pm

Email ThisBlogThis!Share to TwitterShare to FacebookShare to Pinterest
Labels: Competitions