STRIP Magazine #4 on sale next week 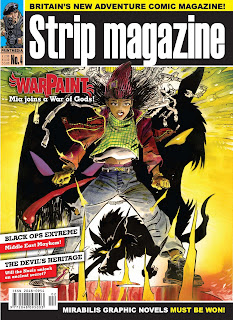 Good news at last from Print Media Productions. STRIP Magazine #4 has finally arrived in the UK and will be on sale in British comic shops next week.

In the latest edition of the all-ages adventure anthology comic, which features a cracking cover by John McCrea, the Black Ops Extreme military squad are sent on a mission to destroy a nuclear power station in the Middle East (story by John Freeman and PJ Holden; there's the start of a new Age of Heroes tale by James Hudnall and John Ridgway; the war between gods hots up in Warpaint by Phil Hester and John McCrea; Nazis hunt for access to a dangerous power in pre-war France in The Devil's Heritage by Jerome Felix and Paul Gastine; a diver finds out even baby sharks can be deadly in Hook Jaw, re-mastered by Jim Campbell; and science goes mad and bad in the Strip Challenge story "Slayer Keith" by David Hailwood, Stu Smith and Dave Thomson!

PMP has also announced that they are making Issue 5 of their first volume a double issue (so there will now be no #6 Volume 1) to close some storylines and clear the decks for the new line-up in #1 Volume 2, their first news stand issue, on sale at the end of May.

PMP say this double issue will only count as a single issue as far as subscribers are concerned to thank them for their loyalty.

• More about STRIP - The Comic Magazine at www.printmediaproductions.com
Posted by John Freeman at 9:00 pm

Interesting. I wasn't aware of the newstand delay since I only by the iPad version. I hope they keep the Devil's Heritage going for Vol 2. And I wonder whatever happened to the Napoloenic era strip (Lawless)?

Devil's Heritage will continue - PMP have had great feedback on the story. Lawless is still in the melting pot!