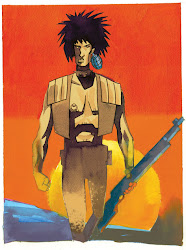 A Baron Frankenstein back up strip for Monsterverse' Flesh @ Blood book 2, 3 and 4, plus monthly Time Team art for Doctor Who Magazine. Open to offers.

I remember vividly cycling down on a saturday to Guffogs newsagent with my mate to get Prog 1. I'd recently been turned onto American colour comics and so to find a British sci-fi comic to match the imports changed my world. I was most impressed by Bellardinelli's Dan Dare (and that knockout colour centrespread). M.A.C.H. 1 reminded me of The Six Million Dollar Man so that shot right up my must reads. Judge Dredd in prog 2 really kicked things off though!

The Cursed Earth - the first Dredd mega epic. It's where I properly fell in love with the art of Mick McMahon after initially being a Bolland only man! I love, love the Last president of the United States vampire story and still rate that segment as my favourite 2000AD strip.

Naturally, Spikes Harvey Rotten gets my vote for fave character. A couple of issues previous (prog 58) I got my first drawing in the Nerve Centre - a punk biker called Hyper Punk . I can't say for sure it sowed any seeds though one of the creators of Cursed Earth recalls my drawing...

It's punky, contemporous stance. It felt like a comic made for Brit kids who liked cop shows , future sport , robots, monsters - all that cool stuff. The fact it had the best artists around knocking out the thrillpower helped. I hated when my fave artists weren't in it each week, but it opened my eyes to many styles which I eventually appreciated/ tolerated.

As long as it continues to reflect contemporary kids interests I think it will stay on track. To lose its sense of humour would be disaster and maybe more regular work from some of the old hands who dug the trenches wouldn't go amiss. Old dogs can teach new kids.

Although most of my strips for Rebellion have appeared in the Meg, I drew one cover for the Andy Diggle Tharg. Wished I'd done him a better job - maybe I'd of contributed more? Ah performance nerves...

Thanks for the link!!!