Interview: Bringing Comics to the Classroom 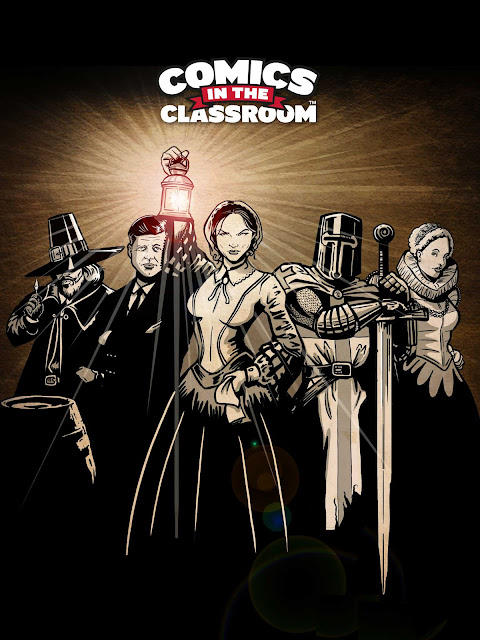 Digital comics are pushing boundaries on many fronts, but one British company is pushing them into the classroom, aiming to harness the timeless appeal of comics to create a uniquely engaging learning tool.

The Directors of Comics in the Classroom are old friends, growing up in the same area of Birmingham, attended the same school etc and haven't been able to shake each other loose yet.

James Ball, 36, is currently the Head of History at the Wordsley School in Stourbridge, West Midlands. A History graduate, he trained and worked as a journalist before entering education and co-authored four highly successful text books for Oxford University Press.

Adam Humphries, 39, has spent nearly two decades in graphic design, including five years as a Senior Designer at McCann's advertising agency. He recently went freelance in order to devote more time to CitC.

With those distinct skill sets and backgrounds, the division of labour broadly falls into James taking care of “words” and Adam taking charge of “pictures” and all things visual.

downthetubes: What is the concept behind Comics in the Classroom and how did it come about?

Comics in the Classroom: The idea behind CitC is to harness the timeless appeal of comics to create a uniquely engaging learning tool. Our titles differ from traditional comics in that, before each page of the comic is accessed, the user reads or listens to around 250 words of prose. Each word is highlighted as it is spoken in order to boost literacy and accessibly and the events that are depicted in the comic are broadly outlined.

Armed with their new knowledge, the user moves on to the comic - but a comic with blank narrator's boxes and speech bubbles. Once these bubbles are tapped, the user is confronted with three possible entries. Drawing on what they have just learned, they identify the correct entry, swipe to the next panel and eventually the next page. CitC is essentially a formative assessment, not that the user will realise this, and by correctly filling all of the bubbles and “unlocking” the comic, they are not only learning, they are demonstrating their understanding to their teacher or parent.

The idea for the App came from the classroom itself and from James Ball's attempts to engage some very challenging Year 10 boys in the study of Mary Shelley's Frankenstein. Furnished with a comic version of the novel from a friend, he colour-photocopied it and tippexed out all of the bubbles. He then read Shelley's novel with the class and set the youngsters the task of generating the text for the comic. It was an instant and roaring success.

Convinced that the concept had wider applications, he approached Adam about the idea of creating historical comics with blank bubbles. Adam immediately saw the potential - particularly with the new possibilities offered by the iPad - and we got to work.

downthetubes: Are your releases iBooks or Apps (so people know where to look) and what has been released so far?

CitC: Comics in the Classroom will be in the App Store. The App is free to download and features three free demos. Each title is priced at £1.99 and can be purchased through in App purchasing. Our three launch titles are The Archduke and the Black Hand Gang, The Dambusters and The Murder of Thomas Becket. We plan to add to our title list rapidly and regularly and, in various states of completion, we have The Attack on Pearl Harbor, Jack the Ripper, Rasputin, Billy the Kid, 1066, The Gunpowder Plot, Joan of Arc and The Battle of Trafalgar in the pipe-line.

downthetubes: The titles are currently available for iPad – are you planning to export them to other platforms, such as Android?

CitC: Absolutely. We are initially launching exclusively on the iPad and iPad Mini but plan to expand onto other platforms such as Android, Web App and Mac App as soon as possible.

downthetubes: What is your target audience? Is it teachers or student or both?

CitC: Definitely both. We intend to market directly to schools as so many are investing in tablets and we believe this App can do so much to enrich the learning that takes place in the classroom. This will also expose the legions of iPad owning youngsters to Comics in the Classroom whose parents, who have often bought their offspring tablets because of the educational benefits they offer, are bound to be interested in an App that both excites and educates their kids. And it will be the kids who decide whether we are successful or not. It doesn't matter who we target if the App doesn't captivate and inspire the youngsters to learn about history.

downthetubes: You have a range of creators involved, including Giancarlo Caracuzzo. Are you looking for more creators or do you prefer to look for artists whose style you like yourself?

CitC: We're always on the look out for new illustrators - and want to try and include as broad a range of styles as possible. It does ultimately come down to our personal preference but we want to avoid developing any kind of house style.

downthetubes: How long does it take to create one of your comics projects, from plotting through to release?

CitC: It's hard to put an exact timescale on the entire creative process as there are so many variables. It starts with us discussing and selecting possible figures or events and, with so many to choose from, it's not always easy to reach a decision. Once we have settled on a subject, James gets reading and researching and starts putting the prose together.

This always provides a challenge as the entire story has to fit into 1,000 words and be snappy and dramatic enough to maintain the reader's interest between the comic pages. Once complete, we independently break it down a comic and then come together to compare results.

When we have agreed on every panel, Adam puts together a rough story board, James writes the copy for the comic and the title is assigned to an illustrator. After we sign off pencils and we get the inks (always a joyous experience), Adam gets to work creating the mastheads and textures and choosing a colour palette for the colourist. Then begins the more prosaic process of recording and mixing the audio and putting the artwork into the app itself.

As you can see, there are quite a few stages to the process and we always have several titles on the go at once. Although several elements are fairly arduous and things don't always run as smoothly as we'd like, it is always an immensely satisfying and enjoyable experience.

downthetubes: Do you have any plans to collect the strips into print form?

CitC: Not in the short term. The nature of the App, with its interactive and educational element, means that a printed version would give the game away. That said, it would be lovely to see the art work all together in a book

downthetubes: You've mentioned you have Oliver Frey, the man behind the amazing covers of the 1980s computer magazines Crash and Zzap64 , working with you on a new title. Can you tell us more about that at this point?

CitC: We were both enormous fans of Oliver's work when we were Sinclair Spectrum owning teens - it did so much to bridge the gap between the very basic 8-bit graphics and the scenarios they were meant to depict. We were certain he could do the same for historical figures and, after buying Roger Kean's book on his work, we discovered he had a love of history. We looked him up on the internet (www.oliverfreyart.com) and he immediately grasped the concept and jumped at the chance to draw Joan of Arc for us. We're very excited about this - both because of the quality of his work and because it's Oliver Frey!

downthetubes: Producing apps is time consuming in itself but what is working best for you in terms of marketing them, given the huge number of digital products aimed at children on the iTunes store (18,000 children books alone for the UK market - and counting?)

CitC: At the time of writing this, we are really only just embarking on our marketing campaign as all of our time has been taken up getting the App itself built. With so much out there it can be hard to make yourself heard, but we're confident our history and educational angle - combined with the standard of the artwork - will set us apart. If you have a look at what education Apps are in the store for History, there is hardly a wealth of choices - and certainly nothing that utilises the iPad's capabilities in the way Comics in the Classroom does.

There is currently a big shift in technology in education, with things moving away from the teacher operated interactive whiteboard to pupil operated devices - and this shift is getting plenty of column inches. We are working with a PR agency to get Comics in the Classroom in front of the myriad of App reviewers - whether they be in the education, tech or parent sector or appear in print or online. We believe we represent something genuinely new and innovative in an area where the software has failed to keep pace with the capabilities of the hardware. That's got to grab some attention! 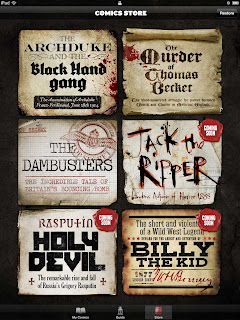 downthetubes: What one piece of advice above all else would you give an aspiring comic creator seeing to break into the industry?

CitC: This is a tricky one for us to answer as we're probably coming at this from a different angle to most people entering the comic industry. I suppose the best advice we can give is to back your own judgment and give it a go. The only way you can be certain it will fail is by not trying in the first place - and it's amazing what you learn along the way.

• Find out more about Comics in the Classroom at www.comicsintheclassroom.co.uk

• Download the free Comics in the Classroom app from iTunes
Posted by John Freeman at 12:00 pm