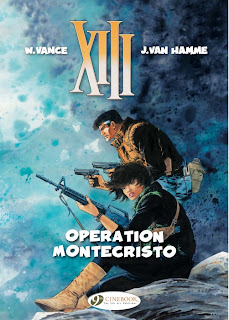 With Operation Montecristo, XIII the series reaches the 15th book of the 18 that Cinebook are releasing and, after a run of solo adventures, writer Jean Van Hamme and artist William Vance get XIII the man back with his friends - albeit not in the most friendly of  situations.

XIII, Major Jones, Colonel Amos, General Carrington, and the Marquis De Preseau and his wife, and ex-SPAD, Betty, have all taken refuge in the central American country of Costa Verde, the president of which is XIII’s former wife Maria De Los Santos. Under pressure from the US, Maria is forced to imprison XIII while the US authorities attempt to extradite him for his “terrorist” activities.

However Maria organises a jail break to free XIII and his friends and get them to a safe house in the country. Whilst there Sean Mullway, who claims to be XIII's father, tells them that he believes he knows the location of the third silver watch which in turn will reveal the location of the gold that XIII’s ancestors hid. He believes that the watch is in the old church of Montecristo which, unfortunately, is now 150 feet below the surface of a dammed reservoir. 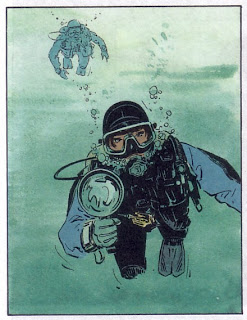 After the solo adventures that XIII had in the last two books, which harked back to the style of the earliest books in the series, it is good to get the gang back together again and off on a what is basically a secretive treasure hunt with little of the political machinations that the series has had recently. While it does feel that writer Jean Van Hamme has added a story that doesn’t really need to be there, there must have been a quicker way for XIII to find that third silver watch, this story is great fun with American agents trying to locate XIII and his friends, while they try to find the final clue to the treasure haul.

With XIII and Jones diving into the reservoir in scuba gear, artist William Vance gives readers five consecutive pages of silent underwater panels as our heroes search for the submerged church and then battle the US agents sent to kill them. With only two speech bubbles with question marks in them, those five pages tell the story of the search and battle remarkably well and are a highlight of the book.

As we get close to the conclusion to the XIII series, Operation Montecristo provides a breather to the heavier aspects of the on-going saga and gives readers a fun, action adventure.

• You can read an interview with Cinebook publisher Olivier Cadic and XIII translator Jerome Saincantin on downthetubes at XIII Questions About XIII.

From all at downthetubes, we wish Cinebook’s sales table maestro Aldous Russell a speedy recovery and hope to see him fit and well at comics events later in the year.
Posted by Jeremy Briggs at 7:00 am