Dennis the Menace, Daleks and Darth in Cover of the Century poll 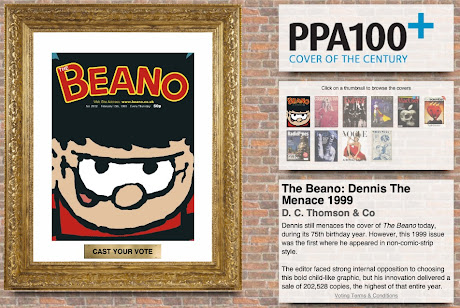 The PPA Cover of the Century Poll is part of the organization's 100th birthday extravaganza, looking back at some of the greatest covers ever made.

The 10 covers span different decades and genres and include covers of Time Out, Mac User and Harpers Bazaar - and three covers in particular will surely appeal to most of our readers.

Star Wars Darth Vader features on Empire's 'Breathing Vader' cover published in 2005, which "breathed" when you opened it. Vader's famous rasping drew in people of all ages and still the biggest-selling issue of all time.

A Dalek threatens readers on a 2005 Radio Times cover that celebrated the Daleks’ return after two decades away from Doctor Who, coinciding with the 2005 General Election.

The publisher neatly brought these two events together by recreating a famous 1964 scene of Daleks crossing Westminster Bridge – and had to clear coachloads of tourists to get the shot. A memorable image, topped off with the cheeky coverline: “Vote Dalek!”.

The 1999 Beano cover selected is the issue that first featured Dennis The Menace in non-comic-strip style. The editor faced strong internal opposition to choosing this bold child-like graphic, but his innovation delivered a sale of 202,528 copies, the highest of that entire year.

The Professional Publishers Association represents more than 200 companies, covering everything from consumer magazine publishers to business-to-business data and information providers and smaller independents.

They promote the industry in all its forms, protect members through lobbying activities, and advise the industry through communications and training work.