The following tribute is compiled with grateful thanks to Martin Baines, Gerry Dolan, Martin Griffiths, the Illustration Art Gallery (from where much of the information featured below about Colin's career was sourced), Steve Holland , the New Camden Journal and Geoff Senior.

We're saddened to report that the British comics industry is one less very talented artist with the loss of astute Scottish scholar and veteran artist Colin Andrew, whose credits span several decades including work for Eagle, Doctor Who Magazine, book publishers, advertising and much more.

Colin, who died in the Royal Free Hospital in Hampstead last week, had a long and varied career in comics and as an illustrator and book cover artist, yet remains one of the lesser-known names in the field despite some high profile work.

Born and raised in Dundee, he found work as a junior in Bill McCail's Mallard Features studio in Glasgow. His first published work was a cartoon in Lilliput magazine, and his first strip was for a local paper. For the latter he dreamed up the storylines and drew layouts for a story of anthropomorphic trains, in the spirit of Thomas the Tank Engine.

After his National Service, he moved to London and joined the King-Ganteaume studio, working mostly Westerns and historical strips for Pancho Villa, Rocky Mountain King, TV Heroes and other Len Miller titles. When the King-Ganteaume partnership split, Andrew continued to work for Kenneth King, contributing to Lone Star and Space Ace. 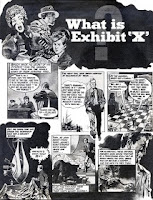 In the late 1950s, he was drawing a great deal for Zip (notably the "Captain Morgan" strip) and Walt Disney's Mickey Mouse. In 1960 he assisted Syd Jordan, another McCail studio alumni, on Jordan's Daily Express strip "Jeff Hawke" on stories such as 'Overlord'. The strips were written by Willie Patterson, with whom Andrew collaborated on two factual newspaper strips in Lord Beaverbrook's Glasgow Daily Herald, one a history of the world cup, the other on famous football players. He would go on to illutrate many sporting events as an illustrator in later life.

His favourite strip was also penned by Patterson, "What Is Exhibit X" in Boys' World, starring John Brody, a scientific investigator for the Daily Newsflash. The strip was subsequently taken over by other creators and Andrew found himself drawing "The Boy Who Knew Too Much" in Buster as well as features for Boys' World, Eagle, Lion and Tiger over the next few years.

A man of decided left-wing ideas, Colin and his wife Janet then worked as teachers in China in the mid-1960s, but he returned to strip work drawing "Tomorrow West" in Solo, followed by stints in "Fireball XL5" and "Stingray" in TV Century 21, and "Marina, Girl of the Sea" for Lady Penelope.

He also worked on the Eagle drawing "Home of the Wanderers" and "The Guinea Pig". In the 1970s he drew "Alias Smith and Jones" for TV Action.

His work in comics then became limited, as he concentrated on illustration (including work for both World of Wonder and Look and Learn) and book covers, including publishers such as the New English Library.

He also worked in advertising and for an advertising studio where he storyboarded television commercials; his work in the latter field included storyboarding the government's sell-off of PowerGen.

He was keen to support the Camden New Journal after its launch in the 1980s, volunteering to support it with cartoons and illustrations, and became a regular contributor for several years.

Andrew returned to comics in the 1990s via his friend Syd Jordan, who suggested he submit samples to Fleetway and Marvel UK. After some 18 months he was contacted by the latter, initially thanks to Paul Neary, and worked on several Doctor Who strips for Doctor Who Magazine. 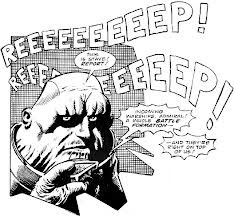 It was at this point that I got to know Colin, although it was my successor, Gary Russell, who worked with him most. His work was astonishing, and perfect for the strip, bringing his talents to bear on bringing on strips featuring the Sontarans (in 'Pureblood') and Silurians ( in 'Final Genesis') - as well as many new creations.

"My memories of Colin are as a man of similar cloth to Syd Jordan," artist Gerry Dolan recalls, who also drew for DWM. "A gentleman who was talented visually, well educated and great company who also had a grounded sense of how the world worked. When they worked at Helicopter Grafix, those guys were mentors of a type to the younger generation of artists who were making a mark forthemselves in advertising.

"We worked hard were paid well and laughed a lot, and from guys like Colin and Syd learned a little bit of both the world we had missed and the possible world to come... I wish looking back that, that time could have stayed still a little bit longer."

"I met Colin, when I started working at Helicopter Grafix," Martin Griffiths recalls.

"He was one of those artist who could draw everything and draw it well, a fantastic artist! From a quick doodle to a highly finished illustration.

"Every artist in the studio would admit to being inspired by him.

"When Helicopter 'crashed' and all the artist went into other studios, we all kept in contact and would meet regularly for a beer or two, enjoying Colin's stories and opinions." 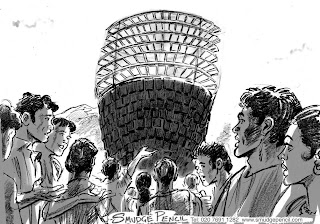 "He was not a man who suffered fools," he continues, "although he would bite his lip if he felt like he was doing work for one, they would be paying the bills at the end of the day.

"Myself, Geoff Senior, Rick Fairlamb and Martin Baines, will miss his presence dearly at our regular Friday night get togethers."

"He was a brilliant, brilliant artist which was an honour knowing him," adds Martin Baines. "Colin could draw anything and his career spanned decades.

"I have known him for over 12 years as he was in the same advertising storyboards studio where I worked as a junior and I was awe of him. He always gave advice and support and will be greatly missed.

"I have lost a great friend and mentor."

"Colin told amazing stories about his times in Russia and China when it really was 'Russia' and 'China'," recalls Geoff Senior. "As well as being an artist of the highest skill he was a font of historical facts and the wheeler dealings of political history.

"His travels were adventures themselves and he saw historical figures whom you read about in text books in the flesh.

"My favourite story was when in the Alps he went walking with a German friend. Without any specialist equipment he followed his friend through a narrow rock 'crevasse' which became so narrow he had to use flexed shoulders and 'shimmy' himself forward. At this point his feet dangling in space with no sign of any floor below!

"Thankfully he made it across and they carried on. Soon they came to a dark hole in the ground. The German friend proceeded to jump into the hole. 'OK Colin, your turn now' called the friend from below. 'But it's dark' Colin exclaimed. 'I can't see the bottom!'

'Don't worry' came the answer. With which the friend lit a match below. 'There, now you can see.' Colin proceeded to jump just as the 'friend' blew out the match.

"That's my favourite story from Colin. Probably because it came from an era before 'health and safety' and people just got on with it.

"Colin was also convinced the Moon landings never happened," Geoff revealed. "The Van Allen belt radiation levels made it impossible, in Colin's view. I could never convince him otherwise, though it was a recurring conversation due to alcohol consumption.

"Martin Griffiths and I visited Colin in hospital the day before he died. We talked briefly as he was wearing a mask which hindered him a little. We made to leave and he smiled as he said goodbye.

"We never thought it was to be the last time we would see him. I'll miss him."

Colin is survived by his wife, Janet, and daughters Catriona and Shona.