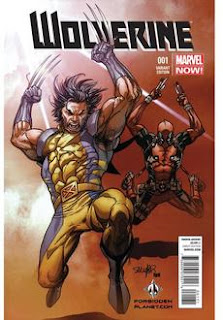 The best there is at what he does gets an all-new on-going series. When Wolverine finds himself the bargaining chip in a hostage situation, he must make a decision to save a little boy that will follow him forever - literally!

Paul Cornell should need no introduction to downthetubes readers but for those of you just joining us, he's a writer of SF/F in prose, television and comics whose credits include Doctor Who for the BBC, Superman and Batman for DC, and he's the creator of Saucer Country for Vertigo. He's now writing Wolverine for Marvel Comics, and his first urban fantasy novel, London Falling, is out from Tor.