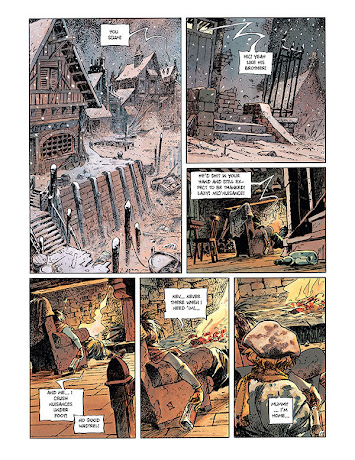 Indie publisher Soaring Penguin Press is to publish Régis Loisel's epic series, Peter Pan for the first time in English, in one omnibus edition, later this year - and has launched an Indiegogo campaign to support publication.
The 372-page, full colour hardback will tell the entire story of how Peter, a young boy on the streets of Dickensian London, became Peter Pan.
The omnibus edition will collect the complete six volume bande dessinee series lovingly created by Loisel from 1990 to 2004. It looks absolutely stunning from the pages posted on the project's IndieGogo fund raising page, with translation work already started. 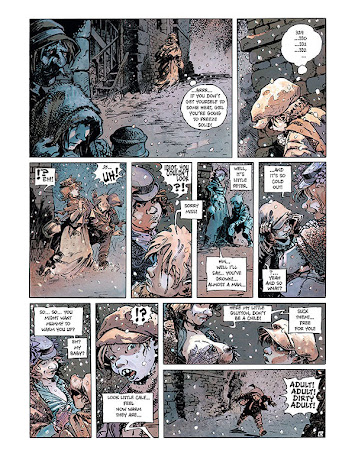 Soaring Penguin Press tell us they have created the Indiegogo campaign, which aims to raise £8000, to support the venture. "It allows me to build publicity for the book and sell copies in advance of printing," Publisher John Anderson told downthetubes.
"We’ve developed a few perks to accompany the campaign," he says, "although we’d rather sell the book. If you have a choice between buying one of the lesser perks, and saving your money to buy the book, buy the book."
Loisel will be attending the BD & Comics Passion Festival, (30th May to 2nd June) at the Institute française, London. If you are able to attend, purchase the Pan perk offered in the campaign, which include t-shirts and badges as well as the book itself. You'll get a copy of the book, and a pass for the weekend so you can meet him.
If you are unable to attend, then purchase the Peter perk, and Soaring Penguin will send you a copy of the book as soon as it becomes available.
Soaring Penguin Press has the UK and European English Language Rights only, so the book cannot be offered outside of the UK or Europe. However, they say they will be shortly starting a Kickstarter campaign to secure the North American Rights.
• IndieGogo Campaign Page: www.indiegogo.com/projects/regis-loisel-s-peter-pan-the-collected-english-edition