It had to be done, apparently.

Posted by John Freeman at 2:57 pm No comments:

Teen Titans movie in the pipeline

Hollywood Reporter and ICV2 report Warner Bros. Pictures is working on a live action adaptation of DC Comics' Teen Titans supergroup comic book. The animated series has been good fun, so let's hope a live version has the same energy - and they grab the cool theme tune, too!

With their superpowers they unite
Teen Titans!
Never met a villain that they liked
Teen Titans!
They've got the bad guys on the run
They never stop till the job gets done
Cuz when the world is losin' all control

Also available as a mobile ring tone, by the way...

(And if you really, really want to sing it in Japanese, click here! The link takes you to the a post on teentitans.deviantart.com)

Posted by John Freeman at 11:18 am No comments:

Not the best of sources, but The Sun is reporting that Doctor Who will be exterminated next year after the end of the fourth series. The paper claims producer Russell T. Davies, exhausted by 16-hour days, has decided to axe the BBC1 sci-fi drama and concentrate on other projects and he and senior staff have hatched a plot to hand in a group resignation in summer 2008.

If true, this seems very odd to me -- although there are also rumours that Robin Hood will not return after season two, so maybe this is part of a wider cull of fantasy shows. Perhaps with the BBC recently deciding childhood stops at 11, corprorate suits (better known as Daleks) feel there's no need for such shows and we're all better off watching gritty reality-driven misery like Holby Blue (police), Black (fueneral directors), Green (bin men) or whatever.

Any cancellation decision seems a bit premature. There's clearly demand for the show both in the UK and abroad, the BBC is building a talented pool of writers and other creative staff, and I'm sure there are plenty of talented producers who could take over the show if RTD does want to move on. It seems clear from the show's rating success that there is a mainstream audience for strong fantasy TV if done right.
Posted by John Freeman at 10:22 am No comments: 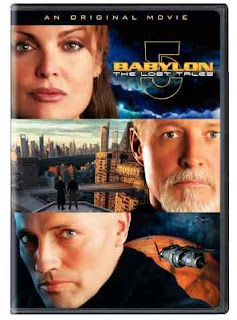 Working on Babylon 5 Magazine for Titan was one of the best editorships I ever had, with terrific support from JMS and his team - and I wish them every success with their new venture, Babylon 5: The Lost Tales, its straight-to-DVD B5 project.

ISN News reports that Warner Bros. has finally posted information about the project over at the official B5 site, www.babylon5.com

The site pops up with some very familiar people to B5 fans -- and you'll find downloads, a photo gallery and much, much more.

The DVD is released on Region 1 on 31st July 2007 (latest Region 2 info below, see update) with stories set 10 years after John Sheridan (Bruce Boxleitner) became President of the Interstellar Alliance and as he is preparing for a fateful Babylon 5 reunion that could prevent Earth’s impending doom… if he will also compromise his core principles.

Meanwhile, aboard B5, Commander Lochley (Tracy Scoggins), confronts an unexpected interloper on the way station – a being whose presence makes the freeport the crossroads between heaven and hell.

Written by series creator J. Michael Straczynski, I'm sure B5 fans will welcome this latest return to his vision of the 23rd century (including a dazzling New York City) – a vision Warner Bros. describes as 'made more spectacular via filmmaking technology unavailable during the original series'.

"Warner UK has DVD releases planned for Supernatural, Smallville and a new-to-DVD Stephen King title so rest of 2007 is going to be great for sci-fi fans," said a spokesperson.
Posted by John Freeman at 9:56 am No comments:

Warner Bros. has announced it is moving up by two days the release date of Harry Potter and the Order of the Phoenix in the US and Canada, from Friday 13th July to 11th July. (It opens 12th July in the UK).

This will give the fifth Harry Potter movie a five-day total for its first weekend and it might well impact on the box office for Transformers, which opens 4th July. (Giant Robots versus wizards -- yep, I'd like to see that battle!)

No word yet on whether this means there will be screenings in advance of 11th July, as was the case for Shrek the Third and Pirates of the Caribbean: At Worlds End, or if the IMAX version of Order of the Phoenix will be moved up to 11th July too.
Posted by John Freeman at 1:38 pm No comments:

Email ThisBlogThis!Share to TwitterShare to FacebookShare to Pinterest
Labels: Film

Matthew Badham just sent me this link to 'Nemesis Fleet', which he feels is perfect reading for anyone into comics/self-publishing comics.

It's a blog for a comic in development by a cartoonist called Abigail Ryder, who describes herself as "a freelance artist in the UK, trying to get my damn comic finished!" (We've all been there, right?)

She's looking to spread the word about her comic in development, tips on self-publishing and also for feedback about her work.

Talking of blogs, I've often bemoaned the lack of a coherent resource for British newspaper strips. 2000AD Online has dcoumented the various Judge Dredd strips, which ran in papers such as the Daily Star and Metro. There's the brilliant Toonhound, and the University of Kent, home to the British Cartoon Archive, has some useful artist bios on its fabulous site: but there doesn't seem to be a huge amount of material out there on the strips themselves. Of course, newspapers are probably even more ephemeral than the print run of a popular comic: until recycling came along, the strips simply went in the bin or were used as firelighters, unless you were a compulsive collector like me who cut Jeff Hawke out of The Daily Express whenever I visited my Gran's, or, later, Steve Bell's If from The Guardian (collections I no longer have - I told you they were ephmeral).

Well anyway, I've come across a growing blog that redresses this lack, compiled by John Adcock. Yesterday's Papers (yesterdays-papers.blogspot.com) not only features information on the strips, but there's also some great samples he dutifully cut from newspapers down the years and, unlike me, kept. It's a welcome addition to the comics blogosphere.
Posted by John Freeman at 7:58 am No comments:

Been busy last week with ROK Comics - several new faces have joined the beta and behind these scenes there's some revamping going on that looks fantastic.

British creator Dave Windett (Simpsons Comics, Daffy Duck, The Dandy) has created another suite of 'Freefall' characters, objects and scenes for the site's Creator Tool, which lets anyone create comic strips, even if they can't draw!

Dave has designed original characters for a variety of publications in the past and provided illustrations for everything from magazines and websites to mobile phones, games, and even childrens shoes.

At the moment, he's also busy converting some smashing pencil designs by Steve Bright into vector art for me, another suite of Freefall characters for the Creator Tool which should be added to the free service soon.

Posted by John Freeman at 11:28 am No comments: 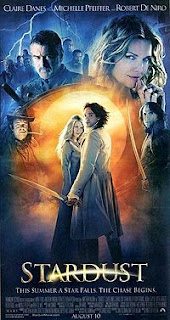 Forbidden Planet London has 20 pairs of tickets to be won for the special preview screening of the movie Stardust, based on the novel by Neil Gaiman, on Monday 4th June at 6.00pm for a 6.30 start.

The screening of the film, not due for UK release until October, will take place at a London West End venue.The screening will be followed by a thirty minute Q&A session with Gaiman himself.

Entries close Thursday 31st May so best get in quick: visit Forbiddenplanet.com to enter.

Stardust, Gaiman's second novel, illustrated by the brilliant Charles Vess, centres on the adventures and romantic destiny of a young man who is an inhabitant of the village of Wall, which sits on the border of the land of Faerie. Tristran promises his beloved that he'll retrieve a fallen star by venturing into the magical realm. (Neil has occasionally made references to writing a sequel, or at least another book concerning the village).

The film, directed by Matthew Vaughn, shot in the UK and Iceland, has an impressive cast. Charlie Cox (Casanova, The Merchant of Venice) stars as Tristran and Claire Danes (The Flock, Terminator 3) as Yvaine but also including Robert deNiro, Ricky Gervais, Sir Ian McKellen, Michelle Pfeiffer, is apparently only 'loosely based' on the novel (but it looks pretty amazing from the trailers, and funny, too) and is scheduled for release in the UK on 19th October and 10th August 2007 in the US.

Official web site: www.stardustmovie.com
Posted by John Freeman at 11:00 am No comments: 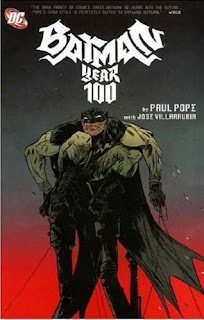 How old is Batman?

Bruce Wayne varies in age between 15 and 50, depending on the retelling. But (and forgive me for not spotting this earlier, but you'll have noticed by now the focus of down the tubes is generally about British comics - certainly on the main site, anyway) - the story of Batman is 68 this month.

Detective Comics No.27 published the first Batman story in May 1939 , and a dark star was born. So belated birthday wishes, dark knight!

There's an entertaining tribute to his longevity on the Inside Bay Area news site, just published today, written by longtime comics fan Sumana Harihareswara, remarking that Batman's success, she feels, is because "We are drawn to Batman's ambiguity, regret, decades-old grief and all those other grown-up situations."

There's also a handy checklist of recent Batman spin-offs for anyone interested in re-tellings of his origins (all links in the list below are to various titles on Amazon.co.uk), to which I've added what I'd say were some other landmark issues:

My other favourite Batman stories? Probably one of the first I ever read, which involved Batman riding a stagecoach in a cemetery: nope, I can't remember the issue off the top of my head but it was drawn, I suspect by Jim Aparo. I'd have been drawn in by the Neal Adams cover it probably had, an artist whose take on Batman brought him back to his roots after the 1960s campness of the Adam West-led TV show.

Then there's wonderful work of Steve Engelhart and the late, great Marshall Rogers, an eight issue run of Detective Comics (#469 - 476, and republished several times), described by some as the "Definitive Batman" (and indeed, the story arc was the inspiration for the Tim Burton movie mentioned above). DC Comics paid limited tribute to Rogers in recent Batman comics after his untimely death, and Engelhart talks about the issues on his own web site here.

I don't know about definitive, but I do know they are definitely some of my favourite Batman stories.

McBride tribute in The Guardian

Following my news item on the sad death of illustrator Angus McBride recently, The Guardian published a full obituary to Angus yesterday 26 May, written by Steve Holland.

In it, William Shepherd of Osprey, the Oxford-based publisher of military history books who utilised the talents of this brilliant artist to the full, recalls "Angus was happiest when there was room for an element of creativity. He could make his subjects look like living people. It was that and the filling in of detail that made his work so exciting."
Posted by John Freeman at 10:18 pm No comments: