In Review: Blake and Mortimer - Curse Of The 30 Pieces Of Silver 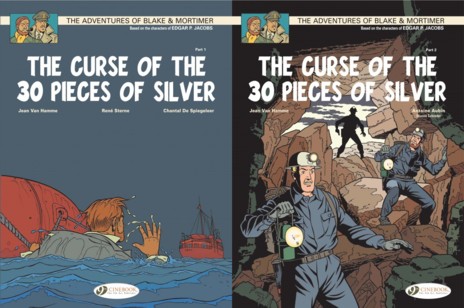 EP Jacobs’ adventurers, Professor Phillip Mortimer and British agent Captain Francis Blake, return in a pair of modern books, The Curse of the 30 Pieces of Silver Parts 1 and 2, written by Jean Van Hamme, illustrated by three different artists, and originally published in France in 2009 and 2010.

When Colonel Olrik is broken out of an American jail, Captain Blake is called in by the American police to advise them while Professor Mortimer is invited to the National Archaeological Museum of Athens to consult on a ancient coin that may be one of the 30 pieces of silver given to Judas to betray Jesus to the Romans. Meanwhile Olrik discovers that his 'benefactor' is a former Nazi officer who believes that if he can find Judas' 30 pieces of silver he will command the wrath of God and so be able to dominate the world. With Blake after Olrik, Olrik after Mortimer, and Mortimer after the coins, the scene is set for a cat and mouse treasure hunt around the Greek islands. 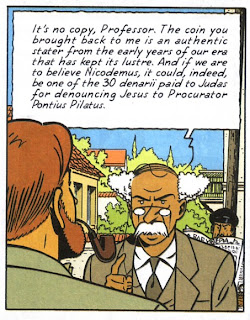 Jacob’ original Blake and Mortimer books can be long winded due to the author’s often lengthy speech bubbles full of exposition making even the single book stories feel very long due to the amount of reading involved. The modern ones can still give the originals a run for their denarii when it comes to long bubbles but with The Curse of the 30 Pieces of Silver, Jean Van Hamme, who we are more used to writing the modern day tales XIII and Largo Winch, gives us a double length story in the same way that he always uses two Largo Winch books to tell one long story.

Here we have a 1950s tale that owes much to Raiders of the Lost Ark as our heroes battle Nazis who are out to recover a Biblical relic, though in this case the 30 denarii of 'blood money' given to Judas Iscariot rather than the Ark of the Covenant. This provides us with a military tinged thriller set in and around the Greek islands as the RAF, MI6 and FBI agents are called on to help out the Greek police. As with the majority of the modern Blake and Mortimer books, female characters are heavily featured, with Greek archaeologist Eleni Philippides teaming up with Mortimer while Blake is accompanied by FBI agent Jessie Wingo previously seen in Van Hamme's The Strange Encounter.

The first of these two books had something of a tortured gestation as the original artist, René Sterne, died suddenly while working on it and it was finished by his girlfriend, Chantal De Spiegeleer, eventually being published in 2009, three years after his passing. The second book was then illustrated by Aubin Frechon and published a year later. Since the art style of the B&M books has always be ligne claire, this mixture of artists is not as jarring as it would initially sound. Indeed there is little to find fault with in the internal artwork and it is the cover of Part 1 of the story which is perhaps the greatest let down. 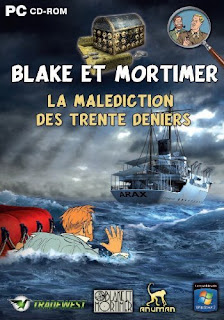 The cover, which shows Mortimer bobbing in the ocean as a ship sails away from him, is part of the storyline but really has to take the biscuit for the dullest Blake and Mortimer cover ever with far too much sky and sea which, since it is set at night, is all virtually the same colour. It’s certainly not Cinebook’s fault, they use the original French covers, but it does make me wonder what the original French editor was thinking when he gave this image the nod to be used on the front of the book. It is interesting to note that the French PC game based on this B&M tale uses a much modified, and visually more striking, version of the cover.

While it does feel like a post-war take on Raiders of the Lost Ark, the two parts of Blake and Mortimer – The Curse Of The 30 Pieces Of Silver are an enjoyable romp around the Greek Islands with more than enough twists and turns to keep our heroes perplexed and the reader entertained.

• There are more details of the English language Blake and Mortimer books on the Cinebook website.

• There are more details on the series in general on the official Blake and Mortimer website (in French).