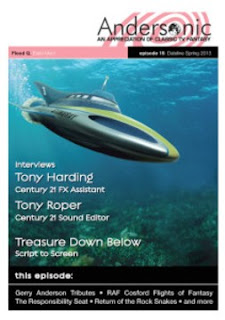 The latest issue of the independent Gerry Anderson fanzine, Andersonic, is now out.

Tony Harding interview - a new interview with Century 21's Effects Assistant on Captain Scarlet, Joe 90, Secret Service and UFO. Tony talks about his time at the studio, what he thought of the set-up, the changes made for UFO, as well as his time on Doctor Who for which he designed K9.

Tony Roper Interview - Sound Editor from Captain Scarlet up to UFO. Tony talks about his duties, how they fitted the sound effects to the episodes and just how powerful Derek Meddings' explosions really were.

Stingray: Treasure Down Below - a look at the original script of this early colour episode  written by Dennis Spooner, with comparisons to the finished episode. And find out what Parker had to do with selling fake treasure maps in Casablanca...

Gerry Anderson Tributes - following the passing of Gerry Anderson, Andersonic writers recall what Gerry's work has meant to them.

Flights Of Fancy Event review - a look back at the 'Flights of Fantasy' exhibition held at the RAF Museum at Cosford in November 2012.

UFO: The Responsibility Seat - a look at an underrated UFO episode and find there's more to it than meets the eye. Sam Denham separates the UFOs from the weather balloons.

Paperback Writers - a look at the range of Thunderbirds novels currently available and talk to writers Joan Marie Verba and Anthony Taylor along with illustrator Steve Kyte.

Strip Story - in the first of a (probably) regular feature looking at an individual comic strip story to see what makes it tick. This issue - Countdown's 'Return of the Rock Snakes'.

More details of the issue and how to order it, as well as back issues, are available on the Anderosnic Facebook page and website.
Posted by Jeremy Briggs at 7:00 am