Judging from the sneek peek trailer (created by Angie Thomas) which  has just been released, fans of Mystery Science Theater 3000 will love this hilarious romp, a knowing throwback to the heyday of low-budget Sci-Fi cinema, described as a 1950s B-Movie comedy fromtThe vaults of Movie History!

Trundling through the 1950s British countryside, unthinkingly misogynistic space scientist, Dr. Boy Brett and the suitably chaperoned Doris Night pop into a quaint village pub for a cheese ploughman's... But waiting for them outside is a most unwelcome visitor: Grurk, an indestructible, rampaging robot from outer space, on a mission to harvest the British Blitz spirit for energy!

Pursuing Grurk in their Morris Minor, will Boy and Doris be able to save the British from a life without stiff upper lippedness, or will Her Majesty's Kingdom be forever resigned to an eternity down in the mouth? 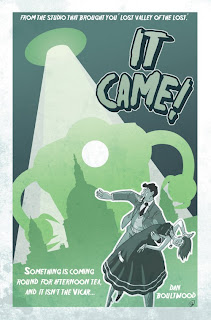 Dan Boultwood's credits include titles such as Danger Academy, Hope Falls and Baker Street Irregulars. Dan origianlly considered IT CAME! as a potential crowdfunded title, so it's great news that Titan has picked the project up. Here's another nifty promo for the project: Rich Johnston also posted some unlettered pages on Bleeding Cool last year here.

IT CAME! #1 will hit comic stores on 7th August 2013. The series will also be available to read day and date on the iPad, iPhone, Web, Android and Kindle Fire, exclusively through the comiXology app and comiXology.com

Retailers can order IT CAME #1 from the April 2013 edition of Diamond PREVIEWS.

• Dan's website is here and his DeviantArt is here, and you can also find him on Twitter

• To keep up-to-date with news from Titan Comics, visit: http://titan-comics.com