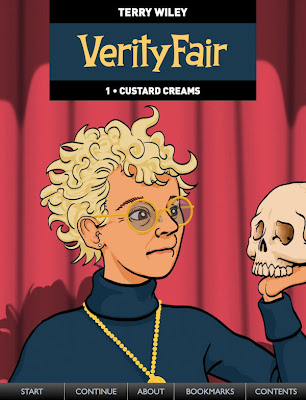 A slightly twisted soap opera with the merest dash of X-Files, VerityFair tells the story of Verity Bourneville, a 40-something semi-talented actress and full-time extrovert, in her quest for success and a good night's sleep. 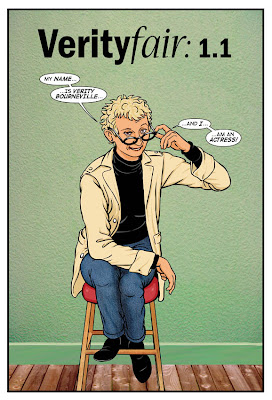 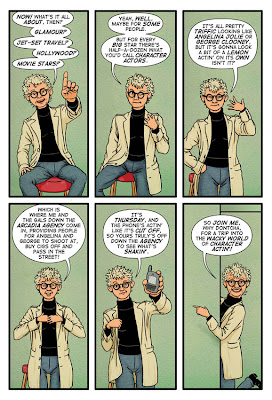 This app collects together almost 100 pages of comics comprising the whole of VerityFair Part 1 – Chapters 1, 2 and 3, which Terry first published in 2010 and 2011.

It gained some terrific reviews, with Bleeding Cool's Rich Johnston describing Terry as "The greatest comics creator you may never have heard of."

"Look out, Verity Bourneville doesn't so much break 'the fourth wall' to address you directly, as demolish it and grab you to join her and her mates for all sort of escapades inside the panels," enthuses Paul Gravett of the story. "Terry Wiley is at the top of his game in VerityFair, fashioning this '45-year-old car-crash of a personality' into the most feisty, fascinating, personable, unpredictable, multi-faceted new character in 21st-century British comics. She'll tell you what it's all about. Brilliant!"

Terry Wiley is also the artist behind Sleaze Castle, with a tight-knit and dedicated group of admirers from within the comics community and others in the know.

"Quite frankly, nobody else produces comic stories that are anywhere similar to Terry Wiley's," says Bryan Talbot. "They are unique, well-crafted, character-driven comics, filled with humour, incident and emotion and populated largely by a cast of distinctly individual female characters. In a medium that's still, in the English-speaking world at least, largely considered by the general public to be dominated by male adolescent power fantasies, Terry's stories are firmly set outside this geek boy's locker-room territory." 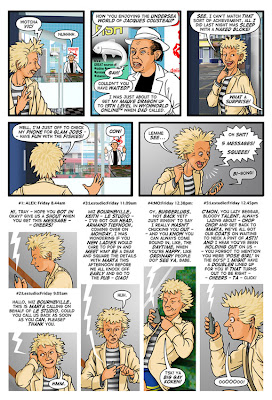 Almost every comics page in the new VerityFair app has audio commentary recorded by Terry exclusively for the production.

VerityFair Part 1 is also supplemented by a whole host of extras including sketches and artwork, seven strips and stories including Sleaze Castle and Surreal School Stories, and an exclusive interview with Terry himself.

This stunning app for the iPad includes the following special features:

• Introductory notes to each extra comic strip and piece of artwork, written by the artist
• Beautiful high-quality digital images, with a specially-designed user interface that gives you fast, smooth swiping from page to page and flawless pixel-per-second movement
• Audio commentaries on over 80 pages, recorded by Terry Wiley exclusively for this app
• Panel Mode where you can double-tap on comics pages to view them panel by panel
• Visual contents and bookmarks that let you view thumbnails of all pages and navigate quickly and easily

Be warned the story does contain adult language and scenes, as indicated by its 12+ Apple rating.