Some of the biggest names in comic art - including top names such as Joe Sacco, Ed Brubaker and Posy Simmonds, John Wagner and Carlos Ezquerra - will be heading to the inaugural Lakes International Comic Art Festival later this year.

Festival organisers have just announced some of the guests of honour who will be appearing at the event which will run from 18-20th October 2013 in Kendal in Cumbria, who include writers and artists from the United States, Argentina, Spain and the UK, working in a wide range of different genres.

The event, which is modelled on the European style comic art festivals such as Angouleme, has a guest list running to more than 40 writers and artists - some yet to be announced.

Organisers plan to reveal more names over the next few months, in the run up to tickets going on sale in May.

American writer Ed Brubaker is making his first visit to a British comic art event.  He is famous for his work on comics like Captain America, Batman, Catwoman, Uncanny X-Men and Daredevil, as well as the creator owned comics Criminal and Fatale. He has won four Eisner awards, the comic industry’s equivalent of the Oscars.

Artist Sean Phillips, a founder patron of the new festival along with Bryan Talbot, has been working with Ed Brubaker for about 12 years, most recently on Criminal and Fatale. “I find Ed’s work believable," he says. "We do crime fiction so there are obviously things like armoured car heists, pickpockets and other crime plots.

Another guest at the festival, the highly rated Argentine artist Jose Muñoz, has had a strong influence on a number of other leading comic artists.  Muñoz is noted for his influential black and white artwork and his graphic novel series Alack Sinner was the inspiration for Frank Miller's Sin City comic series.

Another US writer and artist who will be flying over for the festival is Joe Sacco, who writes and draws international political reportage in a comic book format, providing an insight into the complex issues of global politics while telling the stories of some of the ordinary people living in war torn areas like Sarajevo, Chechnya and Palestine.

Festival patron Bryan Talbot says: “Joe was trained as a journalist and singlehandedly created the genre of reportage in graphic novel form. Immersing himself in a situation, his in-depth reports use the medium of sequential art to its full advantage. His books, such as Palestine, Safe Area Gorazde or his recent Footnotes in Gaza, follow his investigations and interviews, explaining the history, politics and dynamics of the situation as he goes along.” 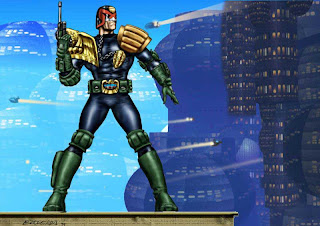 Judge Dredd fans will be particularly looking forward to meeting British writer John Wagner and Spanish artist Carlos Ezquerra, who are the co-creators of the famous law maker.  They have both created many other characters for 2000AD including Strontium Dog.

John is also credited as being one of the people who revitalised British comics in the 1970s along with Pat Mills and others.

The work of another guest, cartoonist Posy Simmonds, could not be more different.  She satirises the English middle classes, particularly those of a literary bent.  Her cartoons for The Guardian, Gemma Bovery and Tamara Drewe, have both been turned into books.  Tamara Drewe won the Prix Des Critiques in 2009 and was made into a feature film in 2010.

Posy has also written and drawn several books for children. 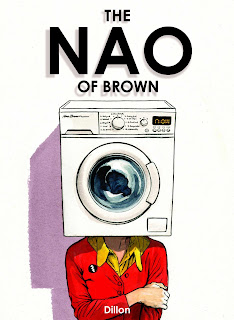 Glyn Dillon won the the Prix Spécial du Jury for The Nao of Brown, the story of a half Japanese, half English woman who suffers from violent morbid obsessions and a racing, unruly mind.  He has had a wide ranging career, including working as a storyboard artist and concept designer for both film and television.

Jon McNaught was the first Briton to win the Prix Révélation, The Best Newcomer Award, at Angouleme, for his first full-length book Automne (entitled Dockwood in English).

Artist Doug Braithwaite began his career in comics 25 years ago working for Marvel UK and 2000AD.  He has worked on many of the industry’s flagship titles, and has drawn just about every major character for both Marvel and DC comics. His recent work includes Secret Invasion: Thor, Wolverine Origins, and the award winning Justice series for DC comics.  He is currently working on the creator owned series Storm Dogs with writer David Hine.

Another British writer who will star at the inaugural festival is Andy Diggle.  He is currently working on Superman and writing stories for Doctor Who, Thief of Thieves and a new supernatural comic, Uncanny.  Andy has recently launched his own thriller called Snapshot with artist Jock.  He has also been nominated for the prestigious Eisner Award for co-creating the New York Times best-selling action thriller The Losers, which was turned into a film.

Andy says: “The wider world is finally waking up to the richness, vibrancy and immediacy of the comics medium in all its diverse genres. Comics aren't just great art and great entertainment - they're also educational. Multiple studies have shown that kids who read comics have improved literacy, and go on to read more prose in a wider range of styles and genres than kids who don't.

“So it's great to see a European-style comics festival come to the North-West, bringing the joy of comics to a whole new audience.

"As for myself, I'm looking forward to meeting the fans - and the other creators. Festival Director Julie Tait has pulled together an amazing line-up of talent, especially considering it's the inaugural festival. Long may it continue!”

These first nine guests of honour join founder patrons Bryan and Mary Talbot, who won the biography category in the Costa Book Awards earlier this year, and Sean Phillips.

Bryan Talbot has also created a special festival poster which features Kendal’s town hall a lake and references to 28 different comic art characters. If you can name all the comic characters referenced in the Festival's poster which has been created by Bryan Talbot, they'll put you into a prize draw to win one of five signed copies and our festival mug. Email your answers to media@comicartfestival.com by 11.00am on Monday 18th March.

The festival will include events where people will be able hear from writers and artists, panel discussions, special live drawing events, films, several exhibitions, workshops and a kids’ zone.  Authors and artists will be signing copies of their work and there will be a marketplace to buy comics and comic art.  There will also be some free events and exhibitions.

Festival Director Julie Tait says: “We’re very excited to give people their first real taste of the guest list for our new festival.  We have a great line up which includes top creators from the UK, Europe and further afield who are recognised as leading lights or exciting new talent - all are pioneers in some shape or form.

“We’ll be revealing more big names over the next few months.  We know people are eager to find out who all our guests are but we want to keep people in suspense for a bit longer!

“The festival will include a wide range of events, including some which are free.  We want The Lakes International Comic Art Festival to appeal not just to the people who are already big comic art fans but also to help bring new audiences to this fantastic and versatile medium.”

“Kendal’s a great place to have this festival and I know that it will draw in many visitors who will experience Kendal hospitality and return again and again. Great work by Julie and her team, South Lakeland District Council is pleased to be able to support this event.”

• More details about the new event are available at www.comicartfestival.com.  It is also possible to keep up to date with plans for the festival by following @comicartfest on Twitter or by liking the Lakes International Comic Art Festival Facebook page.
Posted by John Freeman at 8:00 am