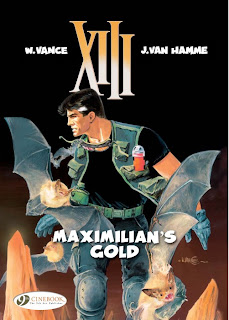 XIII, Jones and co have left Costa Verde and are hiding out in Mexico from the US authorities as NSA chief Dick Giordino continues his attempts to capture XIII. In the relative safety of a friendly hotel, they start to unravel the mystery of the numbers and letters that are engraved on the three watches which gives them what they believe may be the location of the 100,000 gold coins that could be worth up to $15 million. However the suggestion that there may be something worth hunting for in the Mexican mountains attracts some unwanted attention. 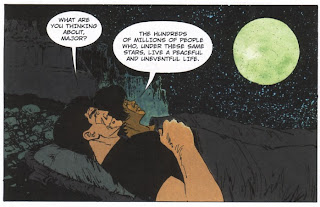 With only two other books to go after this one in the XIII series, Jean Van Hamme is starting to complete some of the story arcs that he has so carefully plotted in the previous books. Maximilian's Gold is the conclusion to the buried treasure arc as XIII, Jones and others finally decipher the information on the watches and set out to find the gold that Sean Mulligan, who may or may not be XIII's father, has been searching for much of years. However as that goes on, the political machinations in Washington over the presidential assassination and power play that began way back in the first book in the series also begin to reach a climax as NSA chief Giordino shows that he is prepared to do anything to preserve his power base.

The last quarter of this book gives artist William Vance scope to provide some quite unearthly vistas and locations in the mountains where the gold may be hidden to go along with his much more familiar planes, boats and rainfall at the beginning of the book.

We are so close to the end of the XIII saga and Maximilian's Gold gives me hope that after all the plotting and side tracks that Van Hamme and Vance have taken readers down over the last 750+ pages of this ongoing story that the final conclusion will be just as interesting as the trip we have  taken to get there.